You are here: Home / Daily Snap / How would you like to hongi a pig?

A hongi a big thing in New Zealand.  The touching nose routine is something that Fortnum is working hard to perfect.  Never more so when one of the neighbours comes calling. In this case it’s a tame wild pig that’s grown up in a field next door since it was tiny porker rescued from the wild when it’s mum was hunted.  Our neighbour Doug has also bred some piglets which are growing up fast and learning to escape their pen.

This pig is taking no chances though but keeping a beady eye on me at the same time as doing a hongi with Fortnum.  Mason was not taking any chances, preferring to be sitting on the veranda and shouting at a distance. 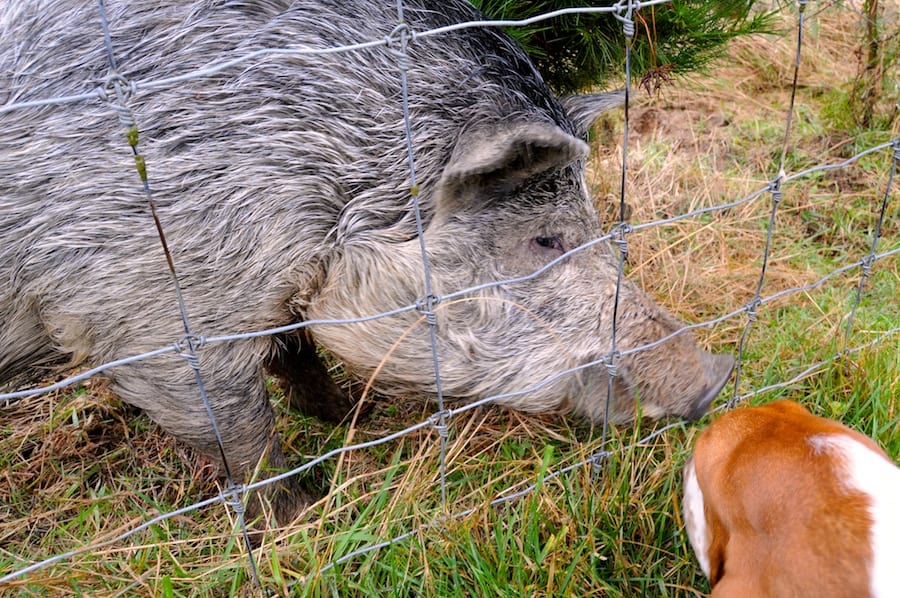 I’ve decided that taking photographs of pigs is a tricky affair.  I’ve tried not once but twice before to capture them close up.  And this time was even harder.  These wild pigs seemed to move a lot quicker even though they were friendly enough. 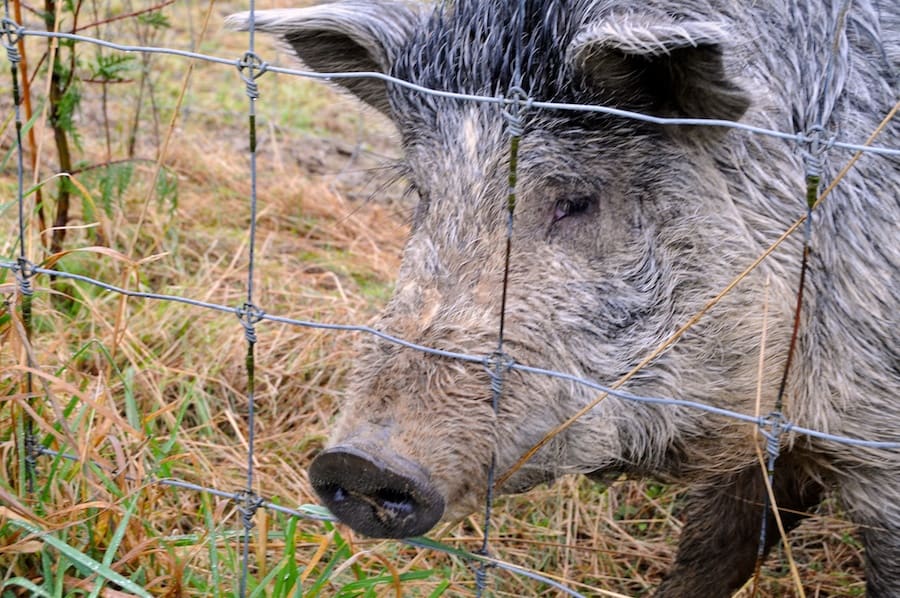 Don’t you just love their furriness. It’s been another damp day so this pig was looking pretty bedraggled.  As was his mate.  These porkers are pretty big – just compare how big their are compared to the beef cattle behind.

The little porker was just as inquisitive but a lot like Mason, rather like to keep his distance.

For all their cuteness these pigs were in big trouble for not just breaking out of their pen but breaching the inner fence to scoff and trample on Doug’s line of trees.  In a neighbourly fashion I went to let Doug and Shianne know not realising that my mud covered waterproofs might cause alarm.  They thought I’d been pig wrestling rather than just back from clearing out the debris out of the kitchen garden.

Seeing these porkers up close has reminded me how much I’d like to keep pigs.  I think I’ll keep to summer pig keeping though as I couldn’t bare the mud in winter.  It’s bad enough wading through to get to the chickens right now.  We’ve had a huge amount of rain since the drought broke in May.  We’ve had about 350mm in the last month and around 50mm just this weekend. The water table is overflowing right now.  We’re sodden.  That’s waterlogged.  In other words it’s wet, wet, wet.

But who cares about the weather when you have such entertaining neighbours.

Previous Post: « Mind mapping – the perfect antedote to a southerly
Next Post: Baking with a hint of history »