You are here: Home / Domesticity / What happens when the pecking order gets out of synch

Our feathered family has grown again with the arrival of some of the neighbours chickens.  This was a deliberate growth plan to give our menacing rooster a bigger harem to hassle. The other new arrivals have settled in well but there was no doubt there would need to be another period of upheaval and settling down as the hens find their place in the overall pecking order. 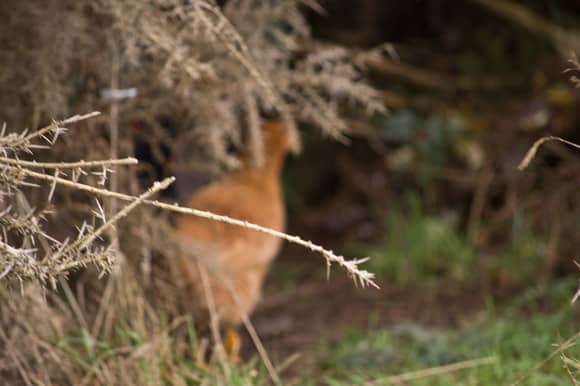 These new birds are more flighty than the other hens and very shy of me.  With or without my camera.  I’ve had to tread carefully so as not to spook them.  There are two dark hens, here’s one heading out of the bush following the trail of food. 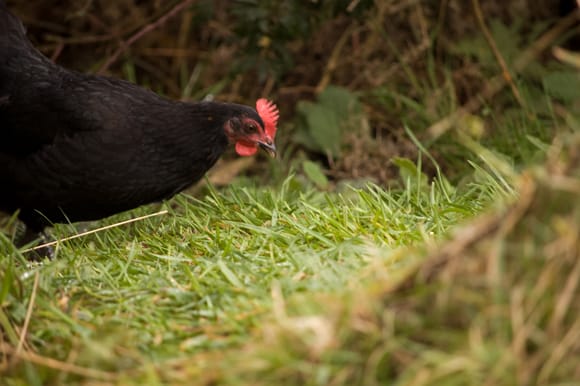 She may be shy but her comb is a vivid red colour. Her feathers have an iridescent sparkle. 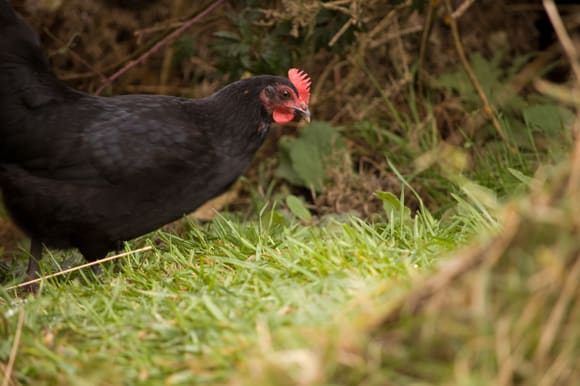 I’m very taken with this hen and her friend, even if she stayed firmly in the bush away from me.  I’ve called the two black hens Milly and Molly. 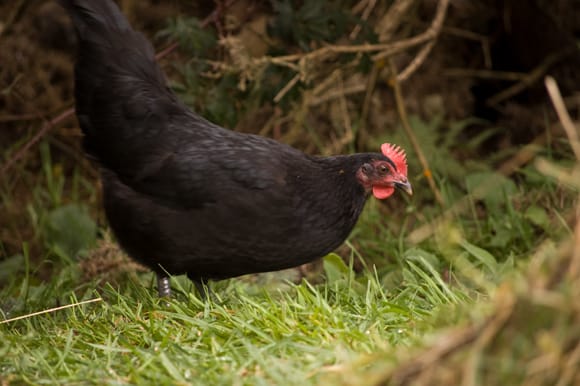 There is a new young lady too.  She’s got wonderful colourings.  She’s shy too.  Her feathers are wonderful camouflage against the bush. 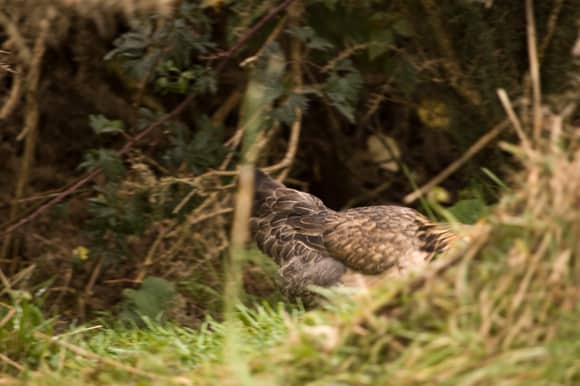 When she finally shows her face you can see her glory a little clearer. 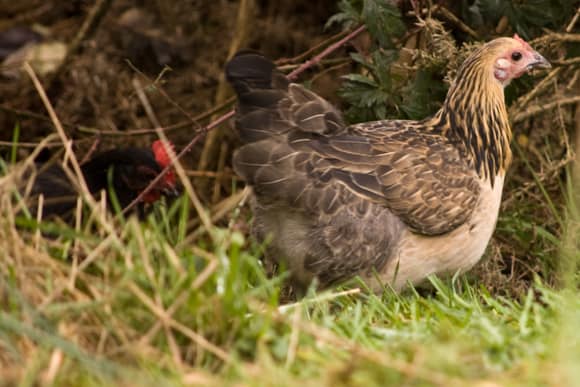 She has a great look from the front too.  I’ve called her Zoe as it rhymes with Chloe and I think that these two hens have real character. 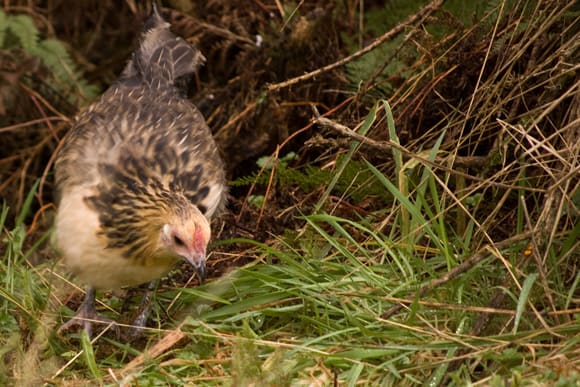 But nothing can prepare you for the fourth new bird.  She’s a shocker.  She is the most camera shy although there is no missing her with her bright colouring. 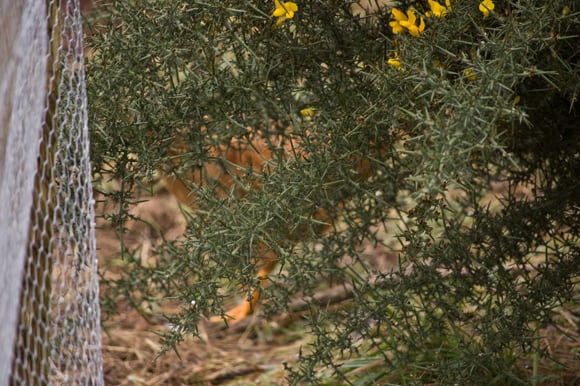 I’ve called her Ginger, for obvious reasons.  I love her orange legs. 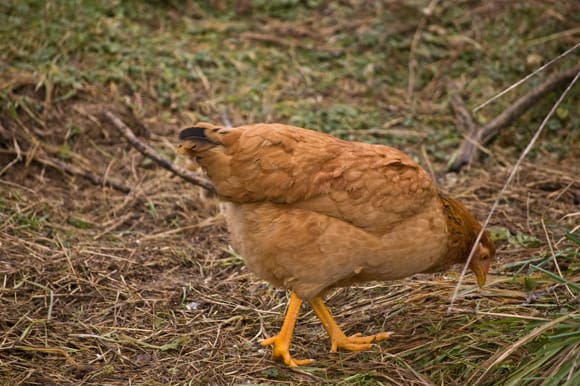 George is up to his usual tricks watching where his harem closely. 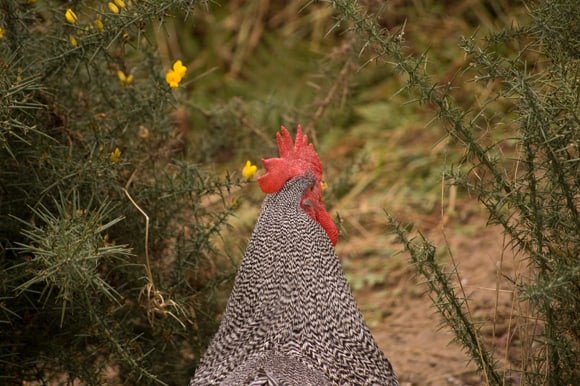 He likes to keep the smallest birds close to him. 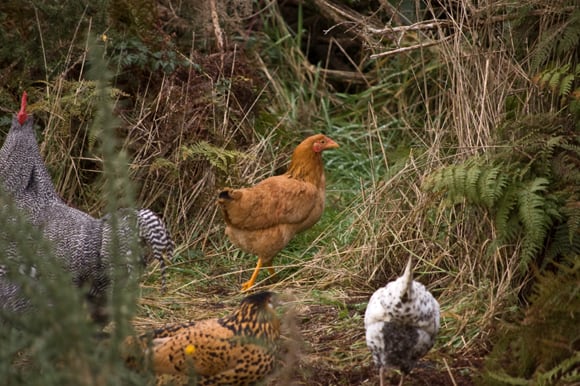 There is no doubt the new arrivals are shy.  Real shy.  They flew off out of the chicken coop in the third day with Milly, Molly and Zoe having set up themselves in a tree rather than coming home to the chicken house.   Every night they tip top off down the garden to the bush and roost in a tree.

I’ve almost managed to get them back to base but at the last minute they escaped through a small gap that you wouldn’t think a chicken could get through.  It’s good to know that they come back during the day but I want them back where they belong.  Most importantly I want them to lay their eggs in the nesting box not in the bush.

I know that this behaviour is all part of sorting out the pecking order it’s just frustrating that they prefer the drafty bush rather than a nice warm chicken house.

In all we now have 10 hens and one rooster.  Here’s the chicken roll call.

Beep and Beep – the brown and black speckled hens

Milly and Molly – the black hens

Ginger – the orange one!