You are here: Home / Domesticity / New girls to spice up the roosters life

We’ve some new arrivals here at Domestic Executive HQ.  Three cheery little chickens to add to our home birds.  It’s all part of the strategy to build up the numbers so that the rooster can spread himself around a little more.

I was given these chickens by Al, our beekeeper-chicken keeper friend.  Not a bad exchange for some rhubarb cake. It was a bit of spur of the moment decision to take them but since they wanted rid of a few of theirs and we needed some more it seemed to make sense.

In the bundle to put them in the car I forgot to find out their breed.  I’m sure they are cross breeds of something.  I do know they are going to be much smaller than our Plymouth Barred Rock chickens who are like sumo wrestlers in comparisons. 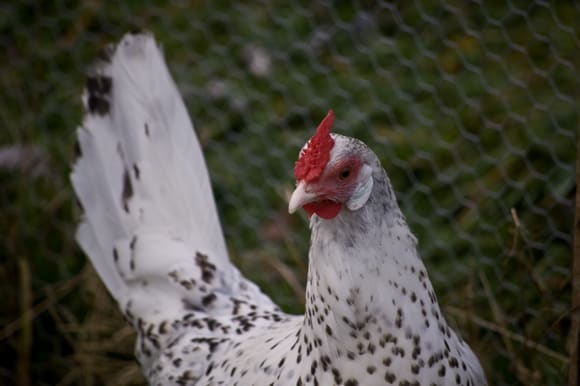 I admit I was quite anxious about putting the new comers in the chicken pen.  Having sorted out the pecking order this was going to upset things considerably.  The early signs were good, not too much stalking and pecking.  As you can imagine George the mad rooster was particularly put out.  He paced around outside getting very annoyed he couldn’t get in to sort them out.

There is a beautiful white hen and two charming brown and black chickens. They were content to stick together.  Safety in numbers. 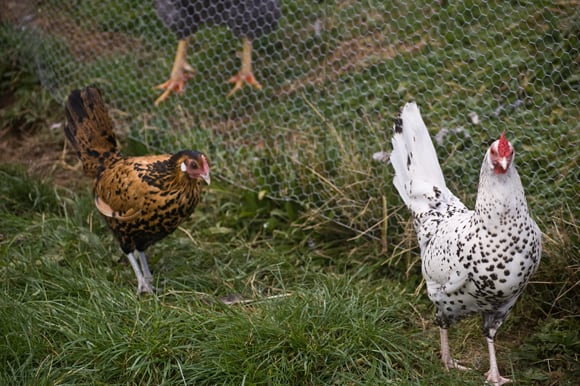 Here they are together, the new girls on the block. 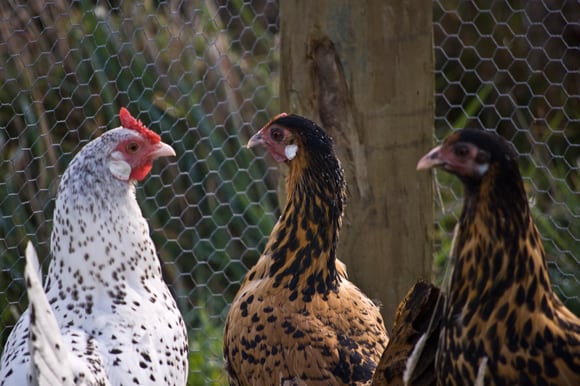 They are young birds so there is still plenty of growing to be done.  I like them though.  They are very attractive and look very sleek against the home birds who are moulting still. 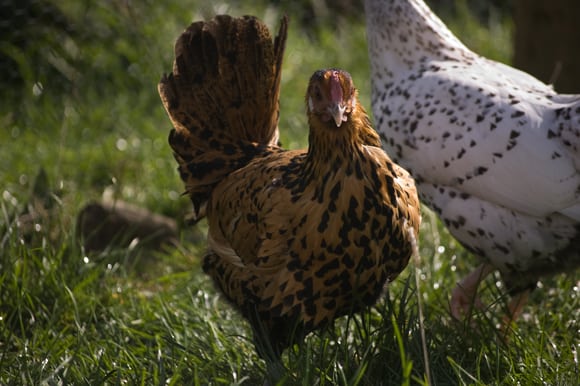 I love their long tails and speckled feathers.  The white one has particular grace about her. 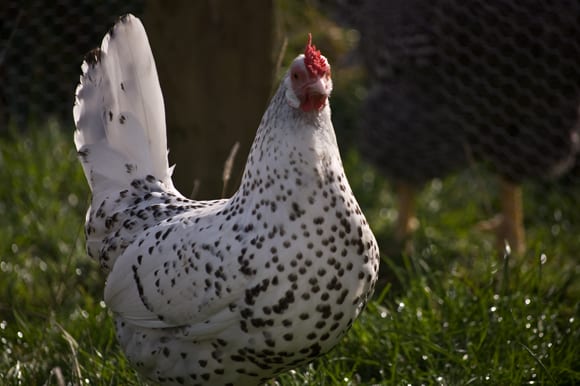 Although this little brown one is a looker too. 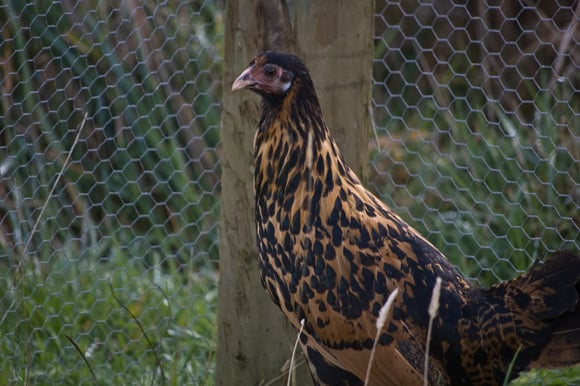 All in all I’m very pleased with the new arrivals although they will I am sure be a constant worry over the coming days.  I hope they settle in OK and there isn’t too much in-fighting to sort out the pecking hierarchy again.

When I peaked in after bedtime everyone was very settled on the roost.  Admittedly there were two clear camps, the new hens on one end and the home birds on the other.  Luckily we have a big hen house so there was plenty of room for people to keep their distance.

George however won’t be happy until he’s fully installed as leader of the birds again.  It’s going to be a while before he’s trusted to mingle with the new comers though.  He’d probably flattened them in one stroke.  I fear that although George’s sentence has been extended he’s still within sight of the executioners gallows.  If he creates as much trouble as he did before he’ll have to go off to a new home or the pot.

After daily rounds of aggravation with him I’m coming around to seeing the proper and correct end to a mad mad rooster.  But we’ll see, after all boys will be boys!

Previous Post: « What’s your culinary obsession?
Next Post: A smile from the sky to cheer us up »