When it comes to antisceptics Germolene was always the coolest cream to have.  Heaps better than Savlon.  You see it was the pink colour I loved so much as a kid even if it did have a nausiating smell.  Imagine my delight to come to New Zealand and find a fruit that smelled a little like Germolene.  The feijoa is a remarkable fruit that seems to polarise opinion – you either love them or hate them.

I was first introduced to a feijoa by a fellow expat at work.  The first time I cut one open I gagged from the smell which to be honest meant I didn’t enjoy the eating too much.  It was only earlier this year that I came across the feijoa again and it suddenly dawned on me that it actually smelled a little like Germolene.  All of a sudden I was more interested in giving it another go.

Setting aside the peculiar smell, feijoa’s are addictive.  No point thinking that you’ll just eat one.  It’s the crazy chemicals in it that drive you to eat more.  I reckon about three is about the right amount for one sitting.  Any more and you’d be a glutton.

Since feijoa’s grow easily in New Zealand I decided we had to add one to our orchard and it arrived from the lovely people at the Edible Garden.  When I opened up the package I was bowled over by the beautiful flowers.  Amazingly intricate and not a whiff of Germolene. 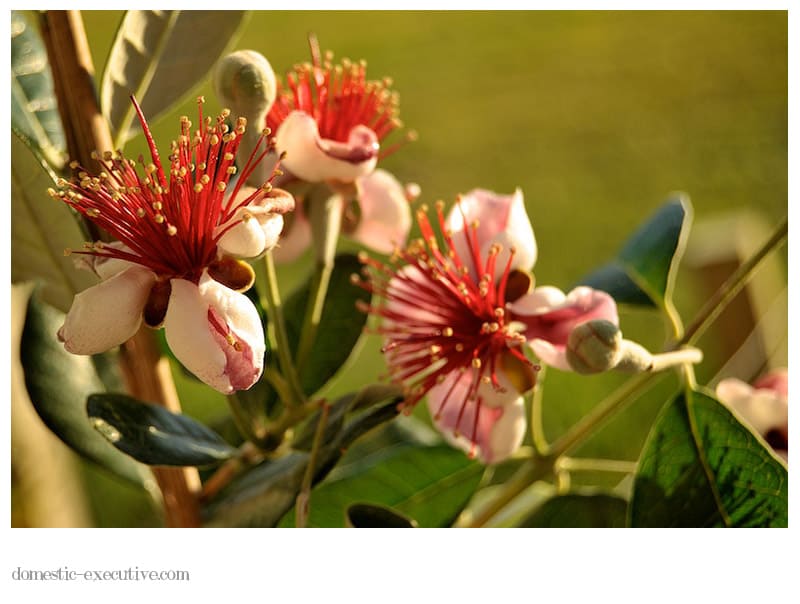