You are here: Home / Daily Snap / Nature’s brush with Snowmageddon

New Zealand’s schizophrenic weather patterns have come into play. After feeling hard done by with all the recent snow we’ve been basking in glorious sunshine today. Amazing how a touch of sunshine can lift the spirits and erase those cold shivery days.  With such fine weather we ventured off to our favourite walking spot Tunnel Gully which provides the focal point down the valley from our back veranda.  Nestled at the bottom of the hills it’s a sheltered spot with plenty of room for the bassets to romp.

I knew there had been some snow damage as last weekend the gates were locked and a hastily scribbled note closed the park closed for further notice.  Nothing could have prepared me for just how much damage has been done. Nature’s brush with Snowmaggedon in this valley pocket has not just caused physical damage of mouth opening proportions but it’s changed the whole ambiance of the place.

Just getting into the main walking track was an obstacle course of fallen branches.  Native trees that simply couldn’t bare the vast weight of the snow that accumulated in it’s branches.  Branches had been stripped from their trees bringing with it vast parts of the native rain forest canopy. 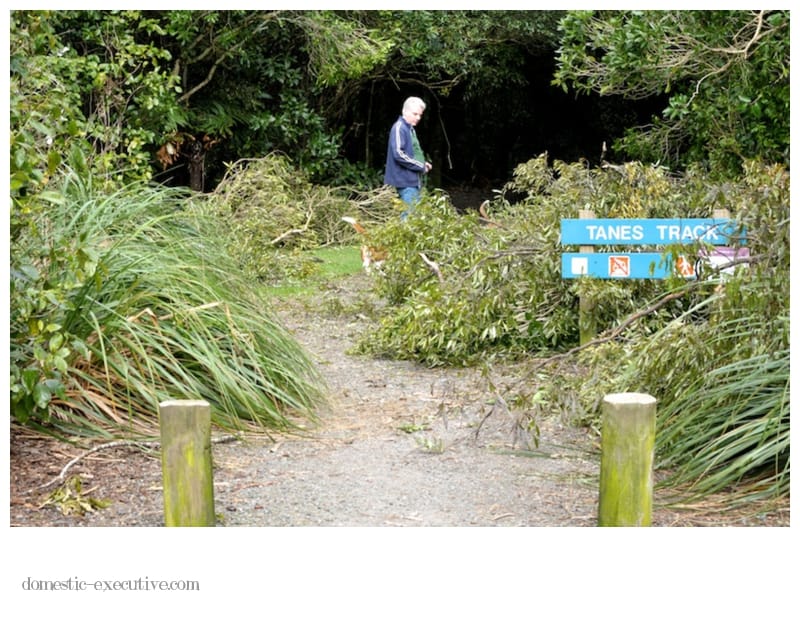 Strewn all around were branches and vines.  All the easier to see because instead of the dim light of the dark tree canopy there was wide open sky. No doubt that snowmaggedon had done it’s work on our natural landscape.  We’ve had a similar effect on the bush area on our land but where we have a few manuka trees knocked over in Tunnel Gully we’re talking about trees that tower like sky scrapers hundreds of feet in the air. 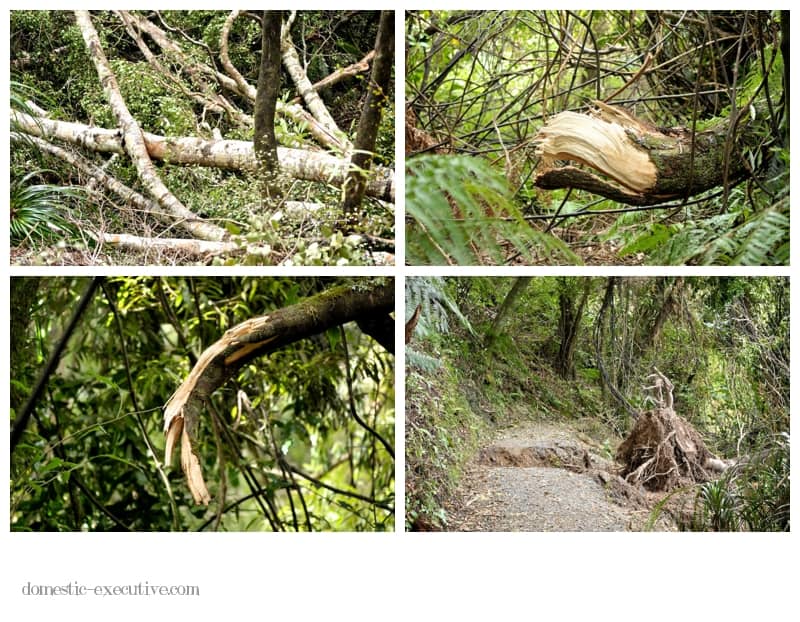 Trees along the pathway had been uprooted taking with it the path itself.  I’m surprised that the track wasn’t actually close to the public or at least some warning signs on this popular walking route since traversing the crater like holes wasn’t for the faint hearted.  Not a problem for the bassets though who saw it as a massive new sniffing opportunity. 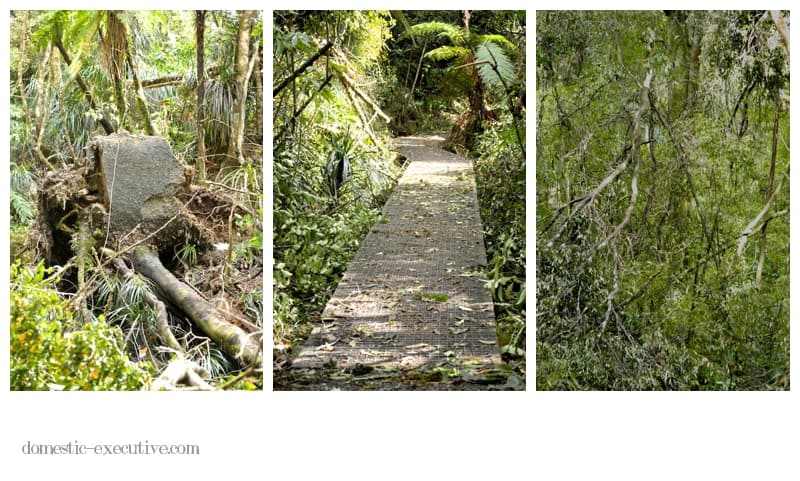 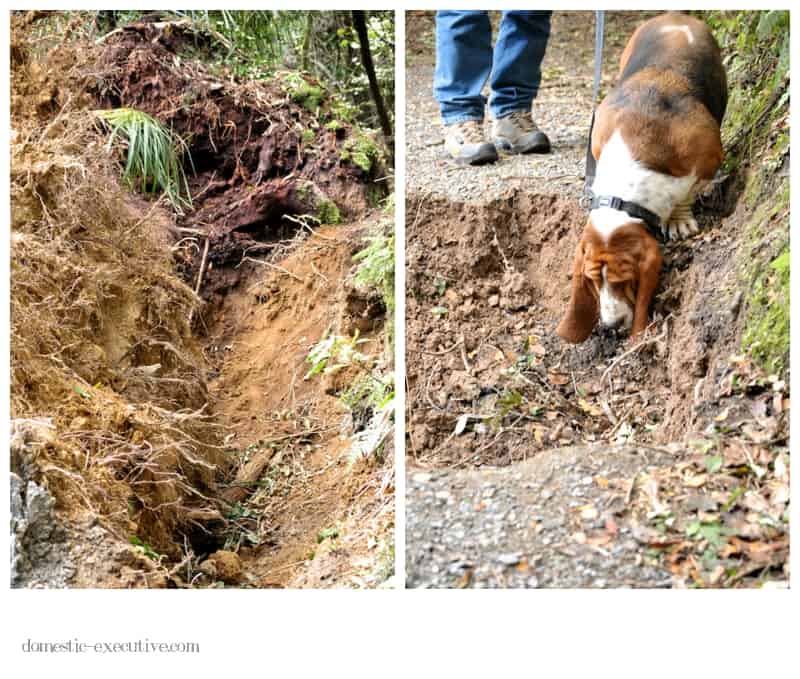 I’m undecided whether I like this new open air look.  There was always something quite magical about dipping in and out of the gloom catching the sunlight as it weaved its way through the canopy creating spotlights on plants lighting them up like rock stars.  It certainly won’t give any cover to light rain which is definitely a disadvantage.  One benefit though is that you can see more of the birds that would otherwise be hidden in the dense canopy.  It was easy to spot, if not photograph, the fantails and New Zealand pigeons which I think seemed as confused as we were by this shocking change in their landscape. 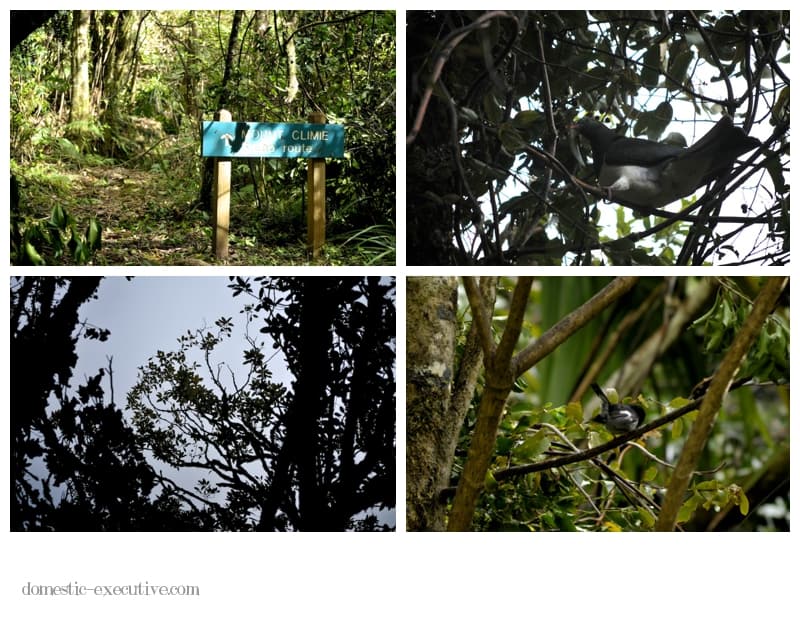 The basset hounds of course thought it was just one big sniffing opportunity.  Exposed to vegetation that had previously inhabited the sky had brought down to the ground new types and levels of aroma that only a basset with 40,000 times more powerful sense of smell would enjoy. 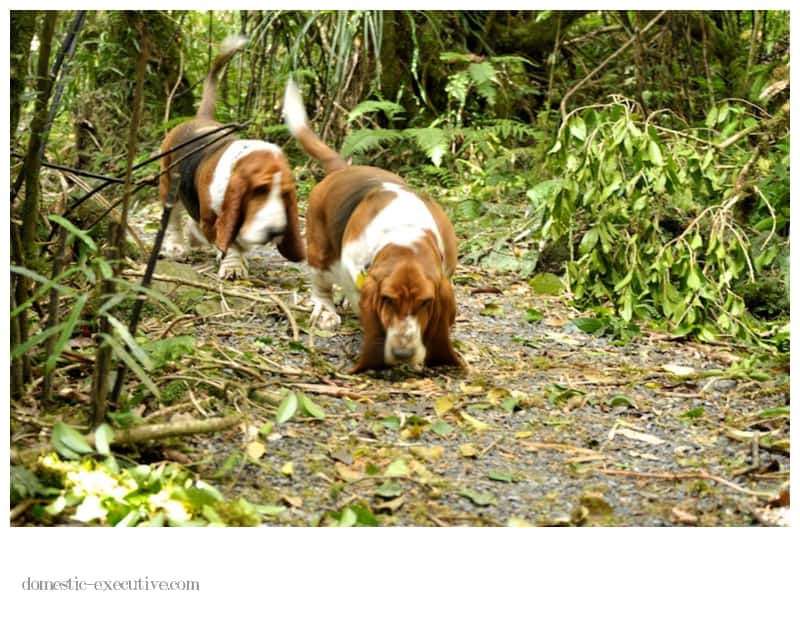 As if to celebrate this new-found attention.  Little basset took root by the stream and shouted for joy. 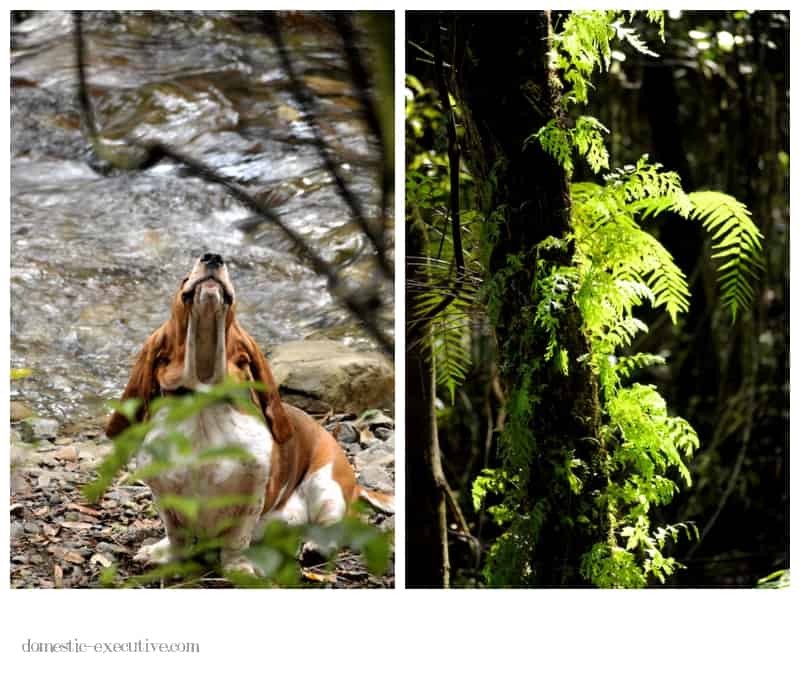