You are here: Home / Bassets / Being neighbourly

It’s more likely that we hear our neighbours rather than see them.  There’s usually a cacophony of chainsaws, brush cutters, lawnmowers competing with roosters, barking dogs, squawking chickens, mooing cows and bleating sheep or goats.  Not to mention the regular chirpy birds.  We may be in the country but the peace and quiet it most certainly isn’t.  Admittedly we contribute to the general levels of noise with added volume of me yelling for missing bassets or bassets howling for missing humans.

There is something comforting to know that across the acres there are neighbours close to hand to help if need be.  Where animals are concerned there is much reciprocal dog or chicken minding.  It’s a lifeline if you ever want to get away for a short spell.  Admittedly the bassets are such high maintenance we’ve yet to inflict them long term on anyone.  Mostly because security is crucial – a basset proof fence if essential if you’re to keep the tracking hounds within the confines of property.  The basset of my childhood was an escapologist extraordinaire who regularly tunnelled her way out of the garden to romp across the farmers fields only to return home hours later having rolled in something unspeakable.  Thankfully Fortnum and Mason are too lazy to make that much effort although I wouldn’t want to put their cunning to the test.

This weekend we have a canine house guest.  The neighbour’s dog is Abbie who happily puts up with the bassets bully boy tactics and will run and run with Fortnum until eventually he slumps with exhaustion.  She wrestles too in the most gentle way although when it comes to snacks there is no holding back, she knows she’ll make it before either of the dwarf dogs ever do.  Abbie is an outdoor dog though so it’s always a wrench for me to close the door on her as the bassets head indoors to take up residence on their comfy blanket.  She seems happy enough though to laze on the veranda and settles happily in the barn to sleep.

We’ve come to learn that labradors have huge amounts of energy.  Abbie is the perfect running companion happily jogging along with me in ways that is impossible with the bassets. In fact, she’s pretty much the perfect house guest.  Undemanding, aside from regular belly rubs.  The basset hounds could learn a bit about manners from her.  Not sure whether that’s a basset thing or a boy thing! 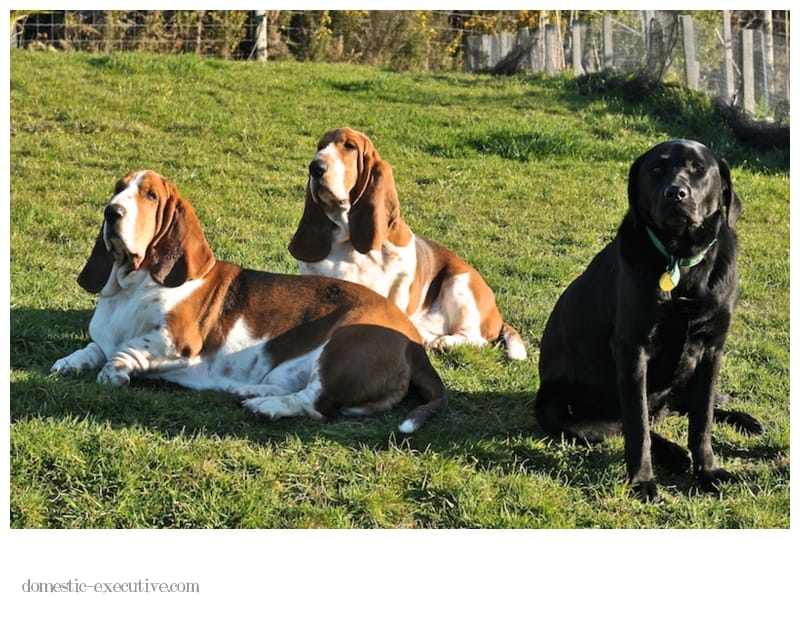