Once again the weather is tormenting us.  Being chased by the rain has become a regular pastime in recent days.   Put this together with a dose of Wellington winds and it’s the perfect recipe for meteorology misery for long suffering residents.  In the last two days I’ve talked to three people who are seriously researching moves to warmer places.  I can’t blame them as someplace warm and dry would be a perfect alternative to what we’re living with right now. 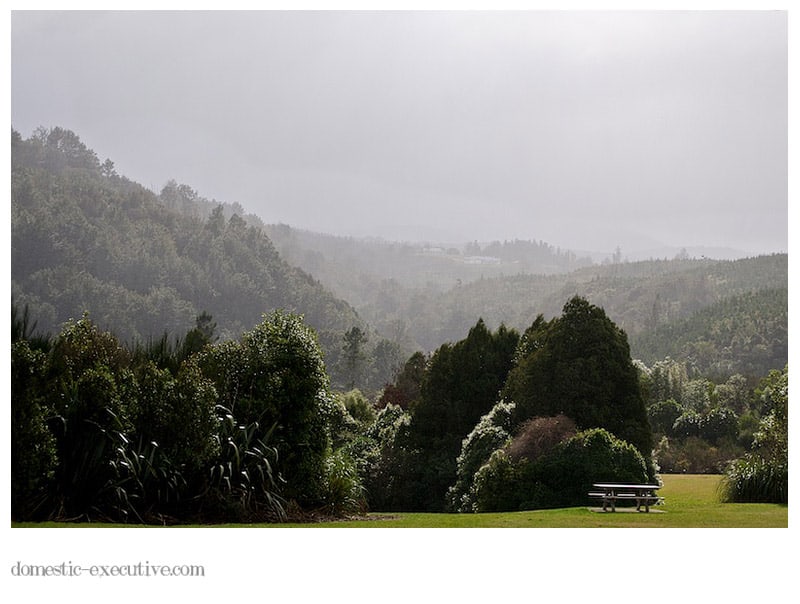 In my day job I’ve talk about how some days being a leader means you have to be able to herd cats.  After my photography trip to Ohariu Farm I can see how I can use the herding sheep metaphor as a way to describe how leaders with the right support, tools and techniques can you can not just lead people in a direction but skillfully shift direction as conditions change.  Watching Greg running the ewes in the pens was fine leadership in action, ably assisted of course by his trusty sheep dog.

When I took the photographs in this blog I was feeling very much out of my depth.  My course companions were fully engaged snapping away whilst I was fiddling with settings on my camera and getting distracted watching Greg and his dog at work.  A little like Blue his second dog (whose name I can’t remember) was focused and skilled at his work. There was however something different about how he related to Greg – he was somehow more devoted.  After struggling to get any reasonable shots from outside the pens I jumped in and immediately the dog came up and made friends with me.  It was after I had made that connection with him I started to see his true personality coming through and wanted to bring that out in my photographs.

It was more of a challenge to make friends with the sheep but watching them run through the pens it was clear that they too had their own language and ways of moving as they were herded back and forth for the benefit of the photographers.  It was most definitely a learning curve to photograph fast moving animals and also look for some interesting portrait shots.  The big learning for me from this section of the workshop was how important it is to watch and observe rather than diving in and taking snaps that I have no connection with. Nevertheless it was an awesome experience to see all the moving parts captured. 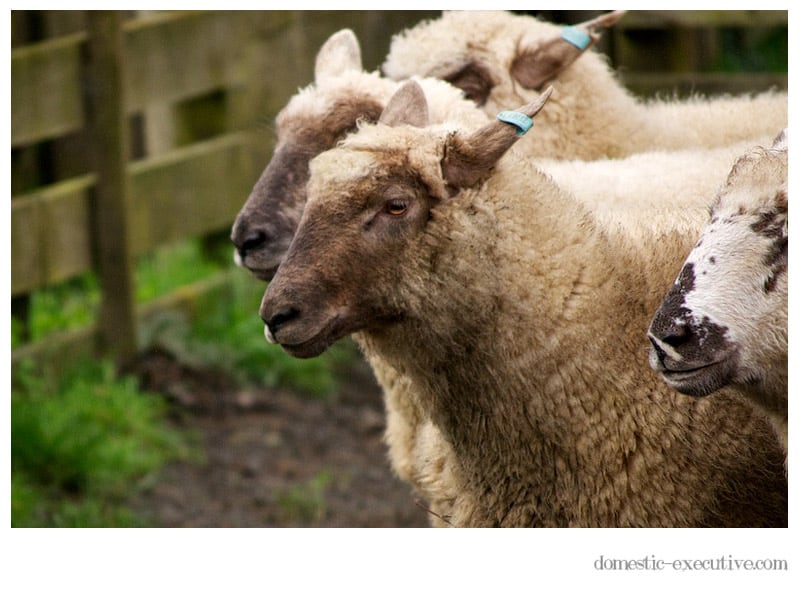 END_OF_DOCUMENT_TOKEN_TO_BE_REPLACED

One of the things I love about New Zealand is you can turn the corner in a city district and see a view like this.  Wide open spaces uncluttered by humanity.  Just as nature intended.  This is a view across the Ohariu Valley taken whilst on the photography workshop. 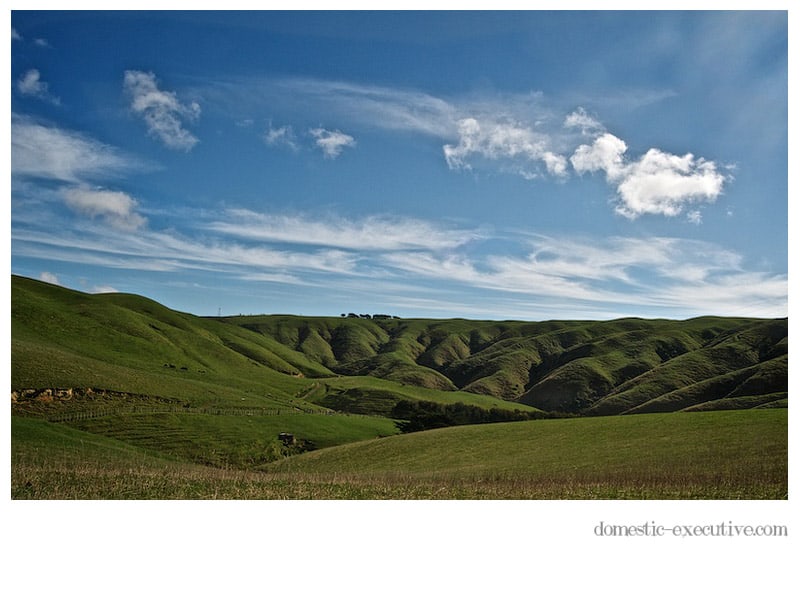 Signs of Spring are starting to show everywhere.  Blossoms are out and the days a little warmer but the real true sign of Spring is the lambs arriving bringing new sources of amusement.  Never more so at Ohariu Farm where they have around 3,000 Suffolk Cross ewes on their 800 hectare farm just 20 minutes from Wellington City.  Run by Jude and Greg Best, Ohariu is both a working farm and a location for functions with remarkable views across the lower North Island hills.  This was the spot for the photography workshop I attended last weekend run by Simon Woolf a Wellingtonian photographer.

This was the first photography course of any kind I’ve attended and I have to admit to being a little phased by the thought of more experienced photographers.  There was a real cross section of people with varying experience but all of us there to learn.  The day was quite free ranging with not much structure teaching which to be honest I could have done a bit more of.  Instead we were left to roam and make the most of the farming demonstrations that Greg who made a fantastic model.

At first I was a bit of a loss to know what to do but after calming my nerves and engaging my brain I came to envisage the potential for telling a story of farming from the farm dogs perspective.  When I had my story idea it was then a question of seeking out the best shots I could muster giving the constantly changing light and regular showers none of which dampened anyone’s enthusiasm or enjoyment. Here’s the first photo blog story with two more in the pipeline. 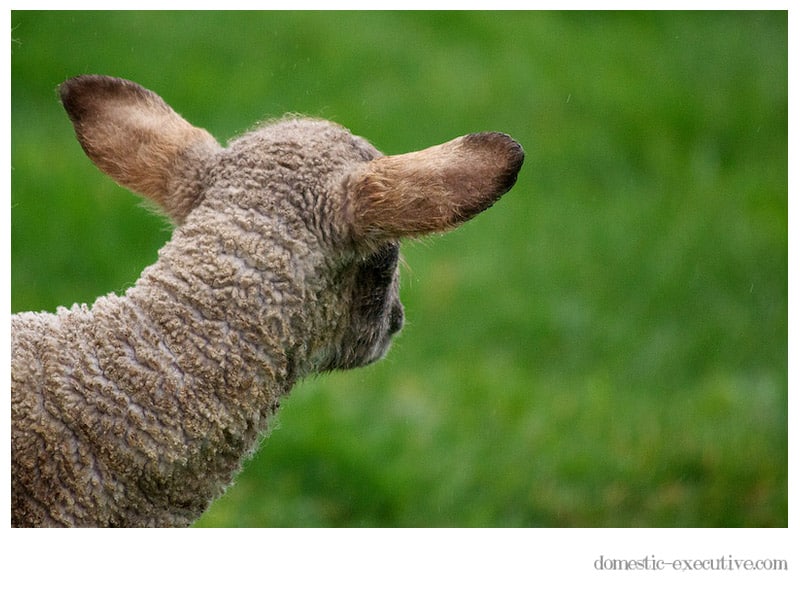 You just can’t beat Spring lambs for their adorable faces.  These babes were just a few days old but very much at home with their mums. 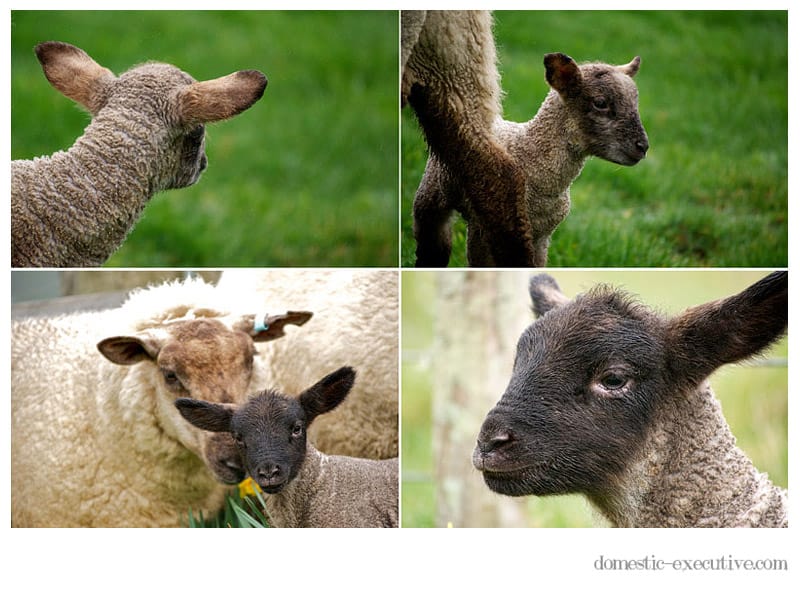 But lambs are part of farming.  Here’s Greg and his dog Blue.  I think Fortnum and Mason could learn a thing or two about obedience and discipline from Blue.  A little doggie boot camp might be on the cards. 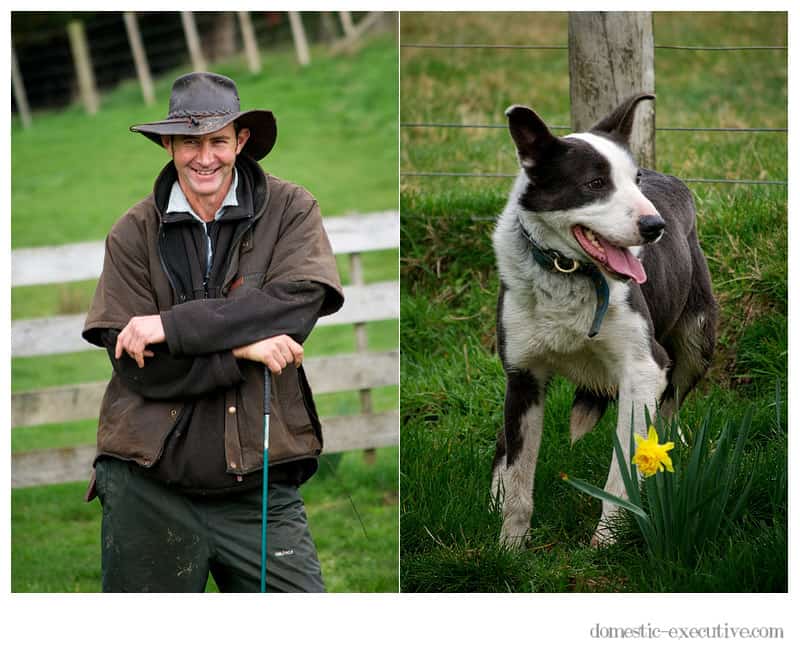 Watching Blue at work was a remarkable thing.  I had to concentrate on picture taking as I was totally mesmerised by his skills and the way he followed Greg’s every call. 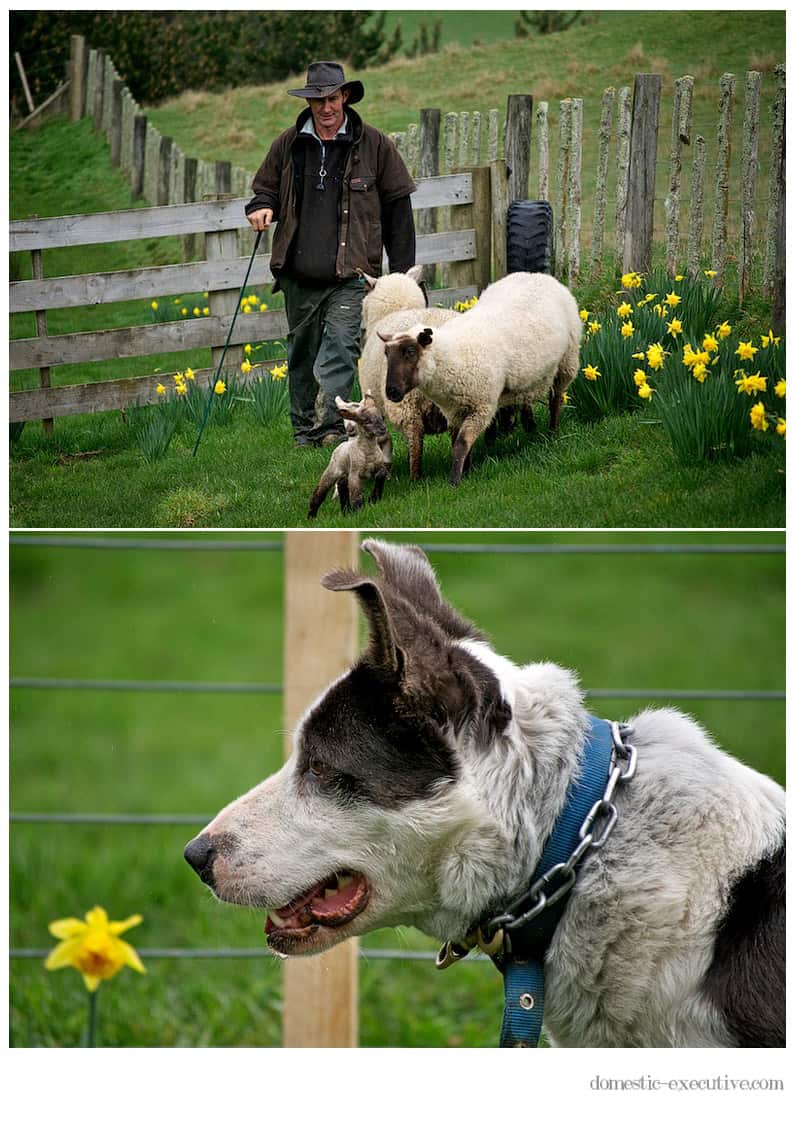 This is a dog that takes his work seriously.  No lying around for this boy.  He loves nothing better than to be out herding sheep. 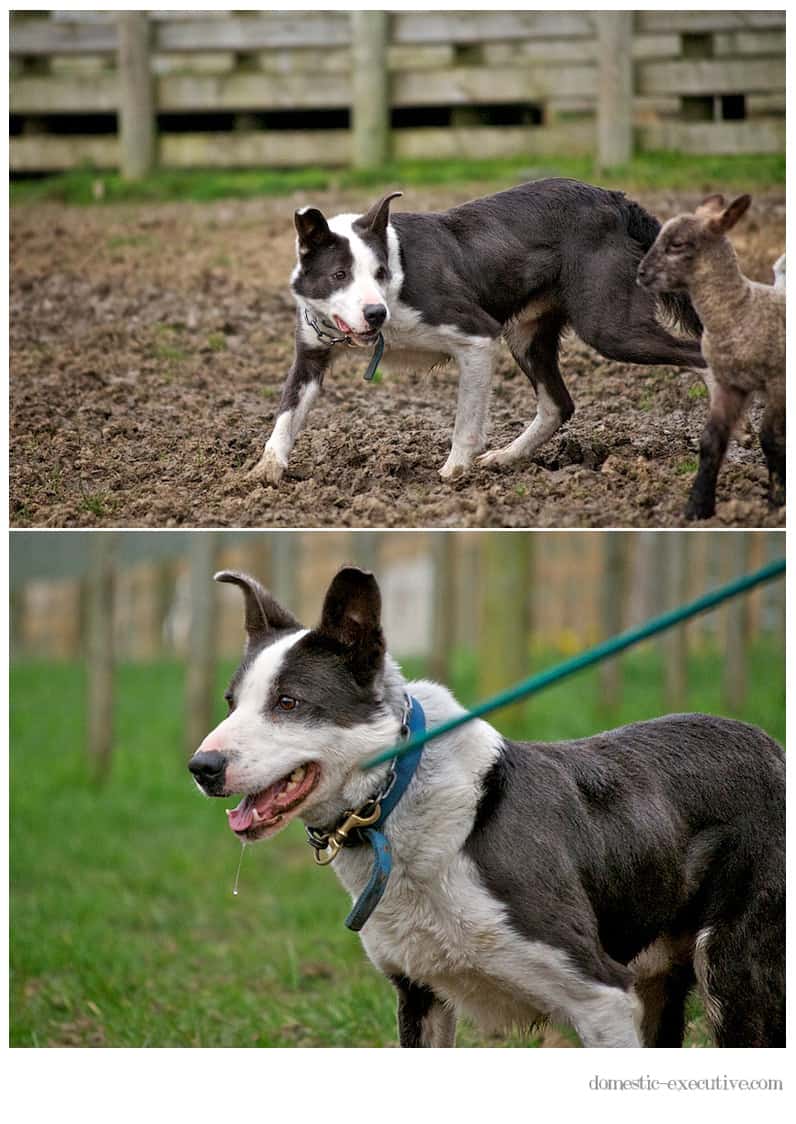 Unlike the bassets Blue does not lunge himself at every passing creature.  No Blue is calmer, more purposeful and follows the instructions of his master.  There’s no digging in of heels and stopping off to sniff at the next fencepost. 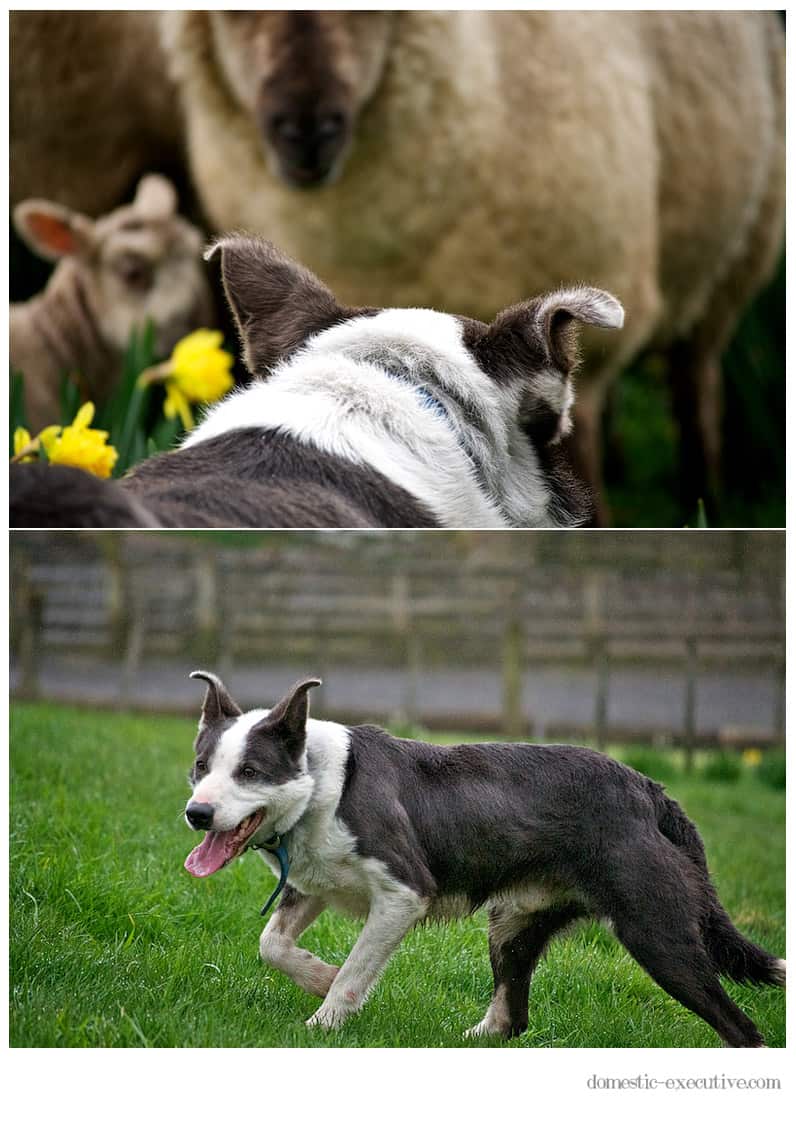 This is a dog that knows his craft.  And the sheep know it too! 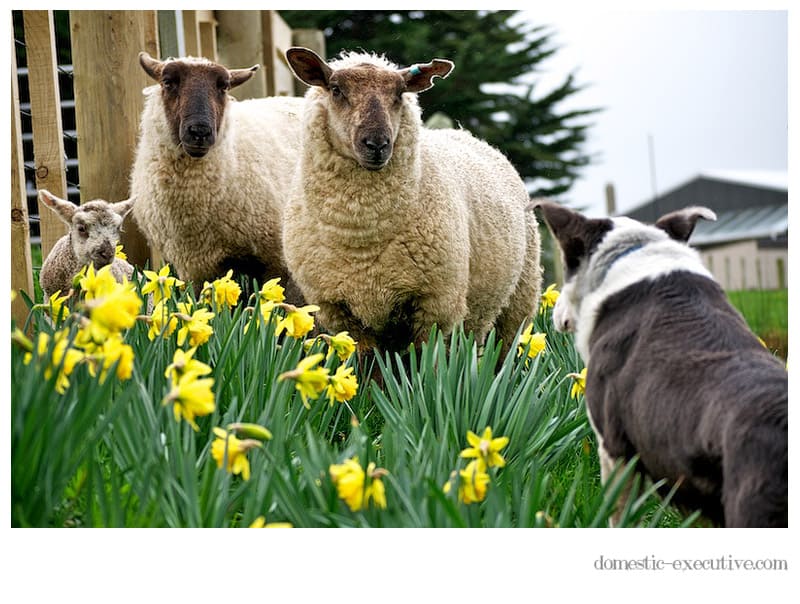 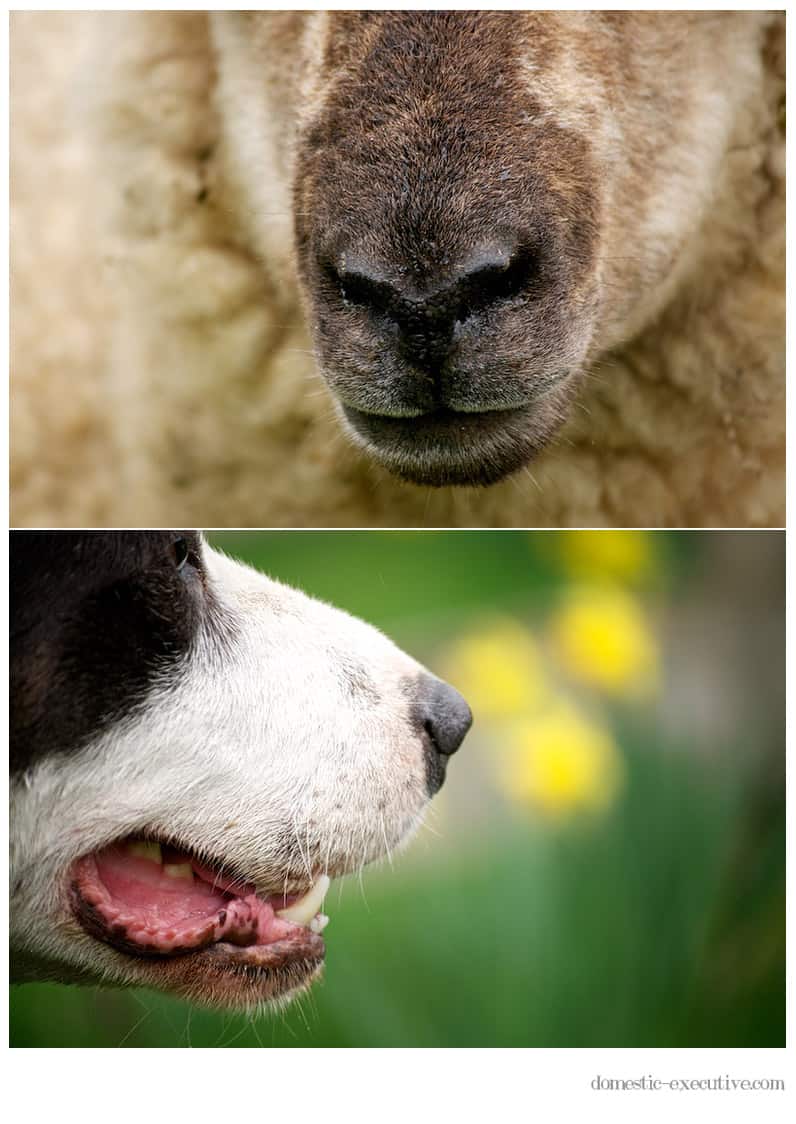 Whichever way I looked there was cuteness abound.  The perfect models for a bunch of photographers all trying to get that perfect shot. 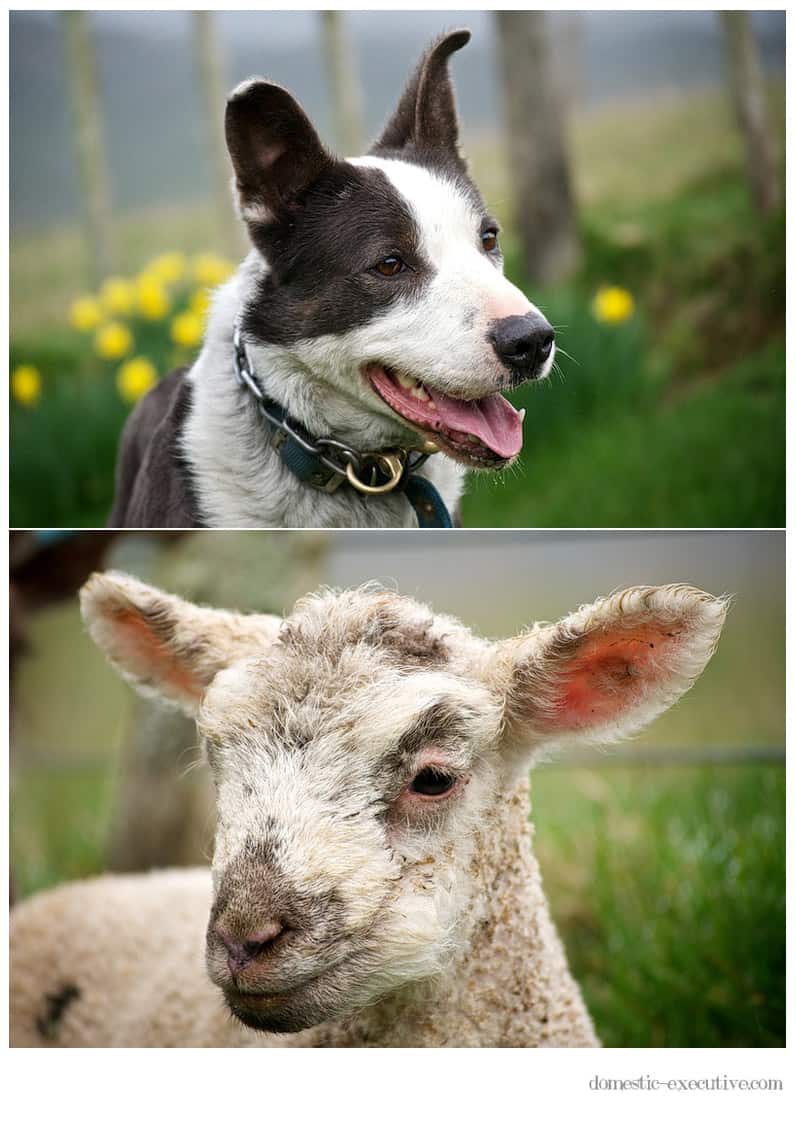 I’ve put together a slide show which I would dearly love to have some music and sounds to.  Although I could have added sound effects I it wouldn’t really capture the true audio visual experience I had so I was inclined not to fake it.  Next time I do something similar I’ll take a recorder so I can get the full experience – in this case the melodic sounds of a Farmer calling to his dog just like they did on One Man and his Dog.   Hope you enjoy the silent version instead!

Oh, and if you’re wondering.  I was strongly advised to watermark my photographs for posting on the blog.  I didn’t have the heart to stamp a distraction on the picture – more work needed to sort this out properly but will do so when I finally execute my blog redesign.  Yes that’s the one I’ve been working on for months and with the end potentially in sight.

It’s been a struggle but I’ve whittled down my picks for the photography workshop to a mere 96 photographs.  Now all I have to do is process them and decide how best to tell the story of the day on Ohariu Farm.  Film photography probably makes you more disciplined in your photography since you are acutely aware of the number of films you’re ploughing through whereas you can snap away quite happily with a digital camera.The problem is that all you are delaying is the decisions of which are the best shots.   Some say that digital photography makes you lazy and there may be some truth in that in the front end but certainly when it comes to post production there’s no room for slacking there. 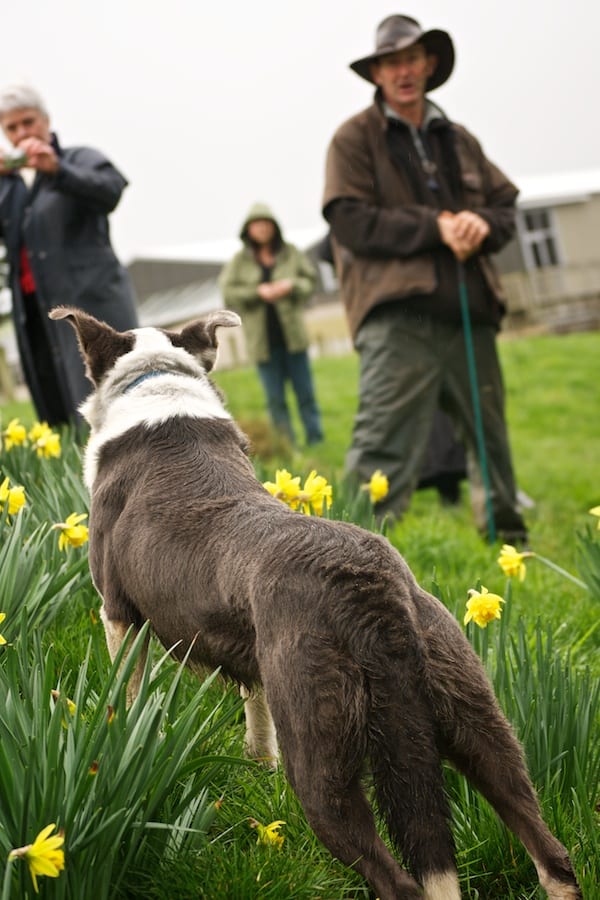 I’m still ploughing through all the photographs from the photography workshop last weekend but in the meantime I can’t resist looking at this Alpaca.  It’s exotic in that cooky kind of way.  I would love to have introduced the bassets to this crazy creature.  Can you imagine the chaos? 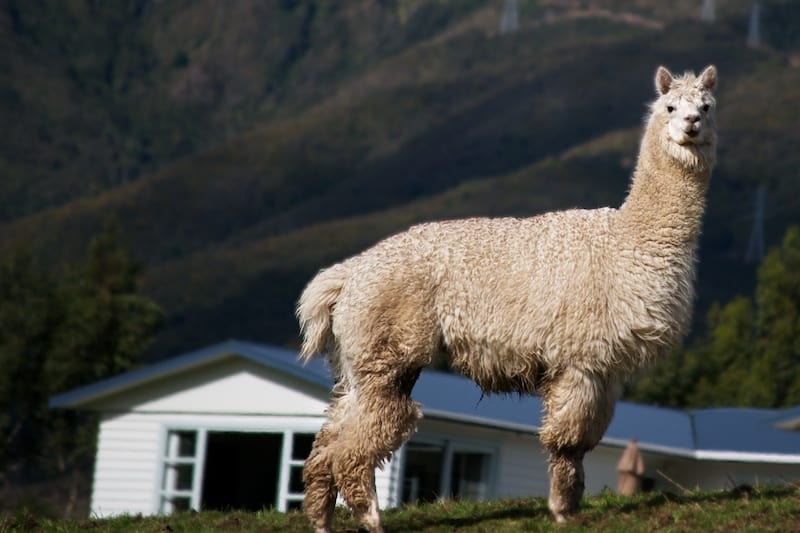 Stand up comics might be a rare breed out in the country but that doesn’t stop us from wanting local entertainment. Admittedly this might mean making friends with out comic neighbours but when they are cute and cuddly I can live with that.  I was delighted to see an alpaca has moved in on a local farm and luckily I had my camera to hand for a quick portrait session. The alpaca was a good distance away so I was reliant on my zoom lens to take me up close. 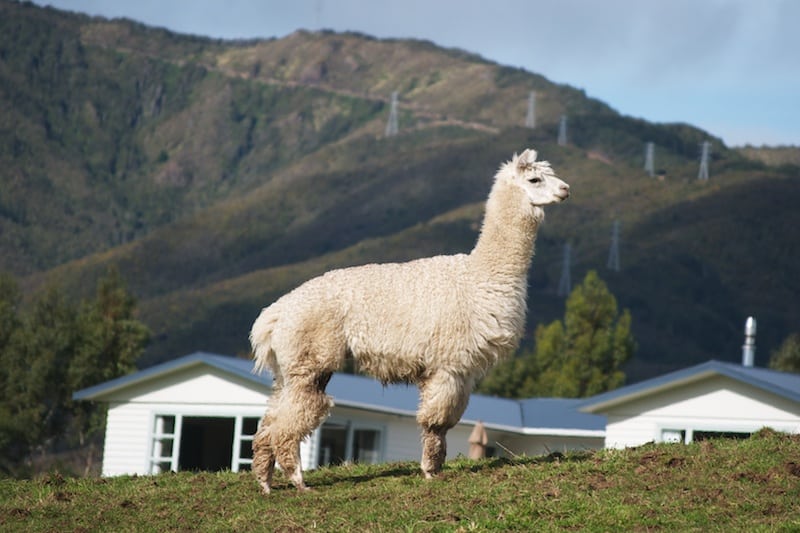 END_OF_DOCUMENT_TOKEN_TO_BE_REPLACED

Spring doesn’t officially start in New Zealand until 1 September but there are signs of Spring all around.  Never more down in the surrounds of Wellington where blossom is abundant.  Being able to photograph these blooms definitely cheered me up.  I was reminded of what we’ve got to look forward to when Spring finally pays a visit in the wilds of Kaitoke.  Shoots are starting to show their tips on trees, our new roses and bulb tips are showing through so it won’t be long now. 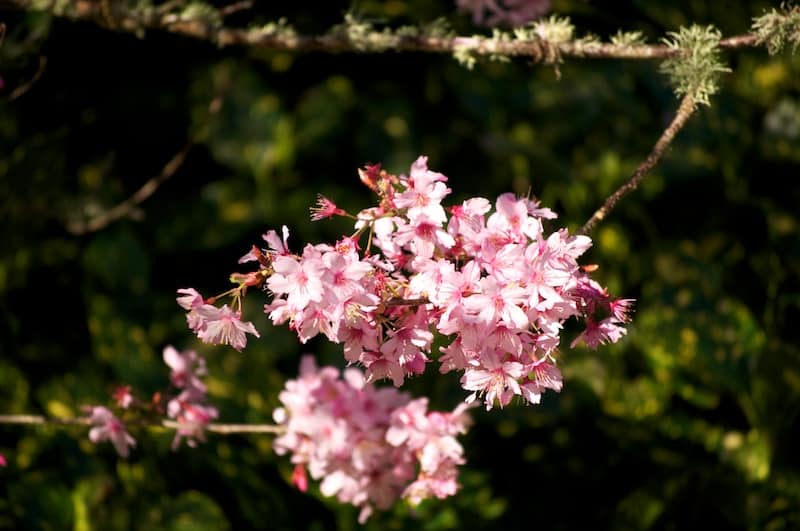 As I pulled up in the car park I was excited yet petrified.  What if my newly charged battery would run out of juice?  What if everyone else was an expert and I was the class dork? Maybe I’d be out of my depths with a host of highly qualified camera geeks.  Before I could worry any more I found myself amongst other photographers, all of whom had their own insecurities to deal with.  Whatever my worries there was no time to dwell on them but watch, listen and learn.   And I did all three.  With over 500 images as a result there is much sorting and tweaking to be done before I can share my adventures at Ohairu Farm. 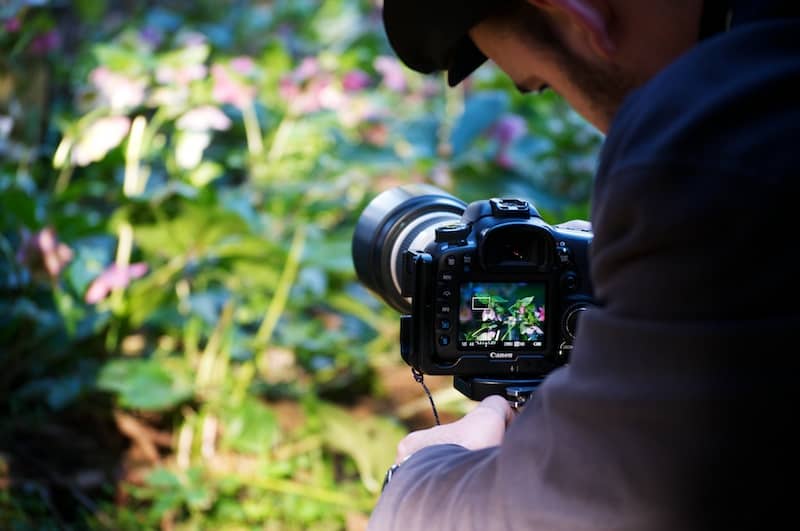 Although a basset hound can’t be trusted to be off lead I do allow Fortnum and Mason occasionally and let them roam under close supervision. I admit, a selfish move on my part really for I find their plodding ways painful to maintain for any length of time and it gives me a chance to indulge myself in some photography. Readers of this blog might prefer I find some new things to photograph but I can’t help myself – these guys are such cool dudes is hard to resist.

One of the biggest benefits of upgrading my camera is that I can now take photographs in low light conditions but I’m still trying to master the full capabilities of the camera.  It’s a darn sight harder than guessing a basset hounds next move.  For I knew the moment I’d point my camera at little basset he’d turn his face away from me.  Nevertheless I like this picture of Mason for it’s dark mystery as to what he’s plotting next. 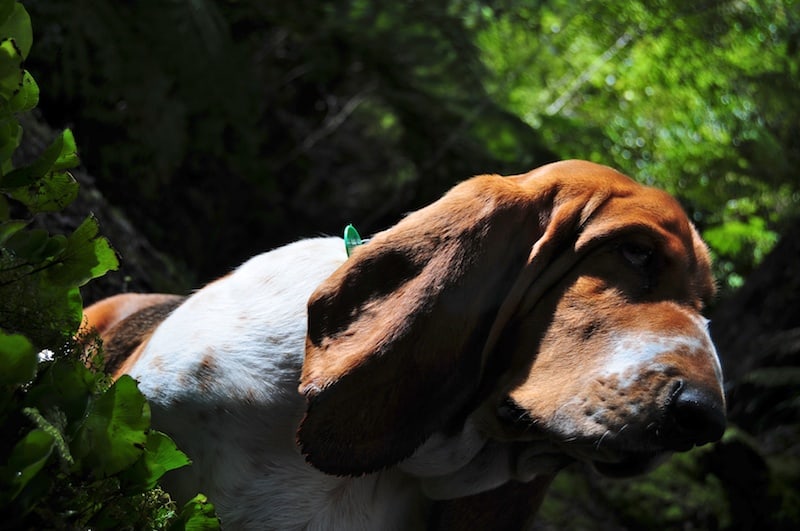