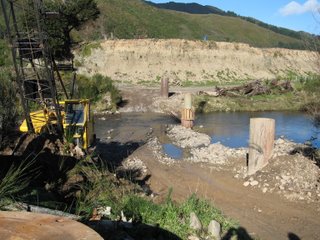 Despite the foggy weather in town, Kaitoke was awash with sunshine. The bridge building is progressing with three support uprights which is another small step to living the dream.

A weather phenomena swept into Wellington for our first experience yesterday – the hanging fog. Whilst we sit high in the hills we had an early clearing as these pics show.

Much of Wellington CBD was shrouded in fog all day sitting like a blanket across the Bay. There was chaos at the closed airport as families were jetting off for the kids school break with some people grounded for several more days due to the lack of connecting flights – a nightmare if you’re only going for a few days.
10.00am – view up box hill in fog 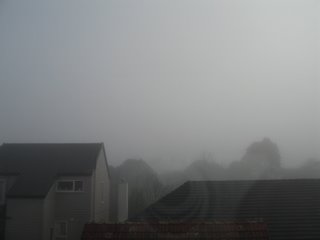 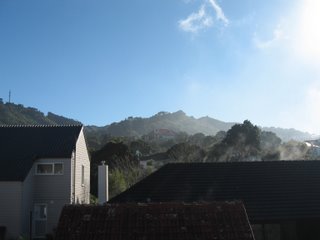 Well, I survived my first day back as an office worker. Everyone was very welcoming which makes a big difference when you’re the newbie. But, offices are the same the world over – same issues, same problems, same characters.

The state of the office fridge and kitchen were hotly debated issues in the staff meeting with the usual tales of mouldy horrors and salmonella scares. Promises of more discipline and consideration for others. As I sat listening to this it did cross my mind that there is money in coming up with a solution for this age old problem of poor domestic standards in the workplace.

I’ve seen many solutions to this problem – rotas for cleaning, cleaners employed specifically to keep the germs at bay, dishwashers and nazi style supervision. I’m not sure that they have ever been totally successful because workplace kitchens are a public place, hence a total lack of ownership by the people who use them. It’s natures way that people will think that the domestic fairy will come in and wave their magic wand.

It’s true that on my first visit to the kitchen (after two laps round the office trying to remember where the door was) that standards were poor – I did manage to find a clean mug and glass so was able to secure plenty of liquid refreshment. I admit I didn’t venture for the milk in the fridge preferring to stick to my peppermint tea but there were people complaining about sour milk being left in the fridge.

However, at the end of the day I was astonished, the domestic fairy had been – the dishwasher was whirring away, the sink was sparkling clean and the cupboard full of shiny mugs. Even the fridge had been emptied of its debris. Time will tell if this is a daily occurance of someone cracking under the peer pressure from the staff meeting.

Still, I survived my first day and have planned my first task for Monday morning. I shall take duster in hand and give my desk a jolly good clean – it’s like moving house, you don’t want to live with other people’s dirt. I accept that my domestic-executive standards have risen in recent weeks but more importantly I feel the need to mark my territory. After all I’ve got to live with it for 40 hours a week for the next 10 weeks.

There are hundreds of lifestyle TV programmes and magazines devoted to building houses. They focus on the aesthetics, the engineering, the pitfalls and the delights. But they all tell a partial story of what is an incredible journey – to have your own house built.

I’ve just finished reading a book passed to me by a colleague of Martin’s. It’s House by Tracy Kidder. This is an non-fiction book but reads like a novel. It covers the various perspectives of building a house – the client, the architect and the builders. It pulls no punches on the complexities of building and explores the equally complex relationships that build between different parties. It’s the first book I’ve read about building your house which gives equal weight to the rational and emotional dimensions of house building projects.

This isn’t a tale of a cowboy builder, a demanding client and an overly artistic architect. It’s a story of people’s passion for building the best house for the location at a price they can afford. Inevitably this means compromise for everyone. I found the book quite inspiring and I hope to learn some lessons as we move forward with the development and build of our new home in Kaitoke. 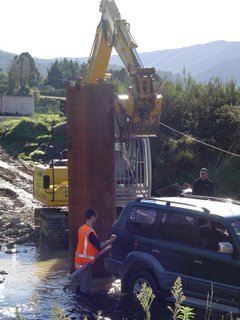 Having found our ideal piece of land we’re now curbing our frustration whilst the wheels of rural development grind on slowly. To access the land, we need a bridge across the Pakuratahi Stream. This will then enable an access road to our plot. After weeks of delay and just in the nick of time before the trout spawning season construction is now underway.

It’s this bit of developing a house that most of the programmes and magazines completely ignor – and in reality its often the longest and equally stressful part of the self-builders journey. Weather permitting the infrastructure work on the rural plot will be complete within the next 4-6 weeks and we can see inside the metaphorical tunnel. The light won’t start shining until we’ve got through the consent systems and processes with the local council. Oh deep joy!

In reviewing Kidder’s Book, The New York Times said “The making of a house is a strange blend of dreams and mundane work, of heaven and earth”.

At this pic shows, we’re off the starting blocks for our house dream with plenty of mundane work to come!

I was visiting Petone and decided noticed this person who clearly has mastered the favoured kiwi pastime – to take time out to admire the view. It was indeed a beautiful day, if not a little chilly, to sit back and soak in the view across the harbour of Wellington CBD. 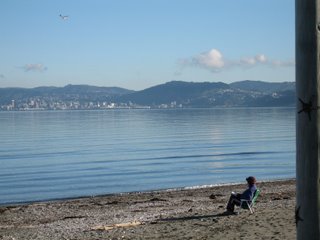 Wellington is rated 12th in the world for quality of living and ranks 100th in terms of cost of living. Not bad eh for a small city at the bottom of the world.
http://www.mercerhr.com/summary.jhtml?idContent=1173105

The views must definitely contribute to the quality elements so it’s only fair that I share another from Khandallah – this time across the bay to Eastbourne. 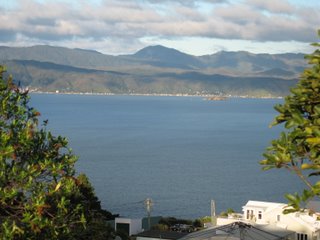 After 93 days of rest, I’m to become an executive-domestic for a while. Yes, I got the job. But, before people despair, it’s only a short 10 week contract with the Ministry of Justice and there is method in my madness.

To build a home based business in consulting and coaching you need to have a network of contacts to draw on. Since mine is a pretty short list at the moment so this will provide my first step towards weaving my new net. It’s a job that shouldn’t be too stretching professionally so I’ll be able to keep stress levels in check and since you get paid hourly I’ll be keeping to a strict regime.

My big worry at the moment is about how I’ll fit in my swimming regime. With the office being five minutes from the station in town I’ll be able to take my togs (kiwi for swimming gear) and head off after work to Johnsonville which is my local pool. Hopefully I’ll be able to time it to avoid the worst of the swimming lessons and flipper ball sessions (don’t ask!).

It’s a daunting thought that I’m going to have to adjust my social antennae and start a new socialisation process. Still, it’s only 10 weeks and will mean that I can avoid the future rejection of “sorry, no New Zealand experience”. There’s plenty to do in the next two days – getting set up for self-employment (a myriad of tax, banking and levy issues) and getting the domestics in order for their period of lesser attention.

Other interview was OK – it was first stage interviews with head hunter so very early days. But, have high hopes for possible success as the head hunter’s parents are neighbours of ours in Khandallah. After all, it’s not what you know but who you know!. 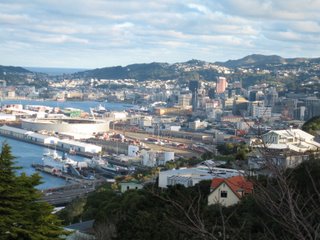 Apart from the dreadful weather, the news in New Zealand has been dominated by a series of horrific crimes. This has included the death of two three month old twin boys and the rape of a woman in her own home. The man arrested for the rape has turned out to have distant familial ties to the family of the twins.

Whilst these tragic events happen the world over, I was pretty shocked to learn that New Zealand has highest rates of domestic violence and child homicide in the world and certainly amongst the OECD countries. This is indeed a dark side of New Zealand.

I’ve been more interested in social issues this week as I mug up for a job interview with the Ministry of Social Development. The Government’s manifesto for the Country revolves around three themes – economic transformation, families – young and old, and national identity. In the last five years priority has been given to getting people into work and New Zealand now enjoys the lowest unemployment rate in the OECD grouping (3.5%). Looking forward the focus is turning to protecting and supporting the most vulnerable groups in society.

Social exclusion and deprivation in New Zealand is most prevalent amongst Maori and the reasons for this are complex. An opinion piece in this week’s Sunday Star Times highlights this issue. http://www.stuff.co.nz/stuff/0,2106,3711599a1861,00.html It’s clear that the Ministry of Social Development has a tough agenda to tackle.

Not unrelated, I’m going for a contract job with the Ministry of Justice to help them with their communications for collecting fines and reparation payments. They’ve just started a campaign identifying individuals to try and tackle the burgeoning payment default levels. As at 31 January 2006 $671.7 million was owed in fines by 482,939 people. Of this amount $366.7 million was overdue for payment. Men between the ages of 20 and 30 owe $213.2 million nationally and these men’s attitudes to their fines range from defiance to forgetfulness and they hope that by ignoring the problem it will go away. It seems that the NZ Government are getting tough on fine defaulters and tax evaders putting in place new legislation that will allow people who owe fines to be stopped at the airports.

On a lighter note, considerable Government time was spent this week debating whether farm dogs and granny’s poodles should be exempt from a new micro chipping law. From 1 July all new dogs will have to be registered and micro chipped so that they can be tracked if they are lost, cause damage or attack. The vote decided that farm dogs would be exempt but not others – bang goes $200 when our bassets arrive then.

So along with the weather, it’s been crime and disorder that’s been dominating the news this week – that and the All Black’s creeping in with another last minute win against Argentina after defeating Ireland in a similar way the two week’s previously. 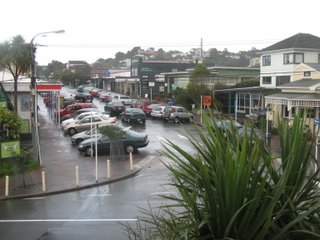 As fate would have it, the moment I started this blog my camera broke. But, now re-equipped we can be back in business!

For those who read my blog on 17 June, here’s the scene a week later. And yes, it’s still raining!