You are here: Home / Snapshots / Pink ribbons and possums

All around the local countryside there are pink ribbons hanging on trees.  This is not a symbolic gesture of support to fight breast cancer but a more practical and visible indicator of local pest control.  In the main it’s to show where the local environment protection officers have been laying bait and traps to keep possums under control.  Possums are the number one pest in New Zealand and they can devastate local habitats of native plants in a short space of time.

I really don’t agree with the poisoning but without any natural predators there are few options – at least that’s what the Department of Conservation and Regional Council People told me when the paid a visit to our house a couple of weeks ago.

Our land borders Regional Forestry land and they were concerned about what we were doing personally to keep the possums under control.  It was a bit of a surprise to be asked this but it’s a sensible thought I guess when you you have native bush like we do.  I’ve never seen any possums on our land but that isn’t to say they aren’t there.  The environmental protection officer explained to me that it’s important to keep on top of the local possum population and offered to include our small bush area (about 3 acres) within their workload.

I don’t think that this was them being just neighbourly.  There is little point them keeping them under control if we are then providing a perfect breeding and living spot for them.  Reluctantly I agreed as long as the traps and baits weren’t at ground level.   Since then this appeared on our gate and it’s made me feel terrible. 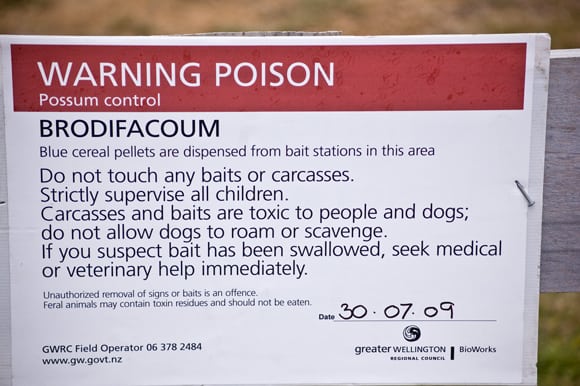 I am now officially a murderer and I don’t feel great about it.  I am now wondering whether I should just have tried to find a possum hunter.  We met one a couple of years ago whilst we were over walking in the Malborough Sounds.  I’m going to ring the Council and find out what they’ve actually done on our land to see whether there is any other alternatives.

I realise that this is not like keeping slugs and snails at bay.  Possums are really a major problem to New Zealand countryside.  Poison just doesn’t seem like a humane way to keep the numbers down and unlike our possum hunter nothing is done about using their fur.  My internet research hasn’t given me much hope for an alternative as all the conservation bodies are using drastic measures to keep them under control.

Here are some of the links I found.

Previous Post: « How technology can make you feel even older
Next Post: What happens when you get Gold! »