You are here: Home / Bassets / Basset fun and finding my photomojo

For the last six months I’ve been stuck in a photographic rut with no serious photography projects underway.  Although I still carry my camera and take photographs for the blog the passion, drive and inspiration got lost along the way.  A cloud seemed to descend on me and I’ve had my head in the clouds ever since – fogged in and a little lost.  I guess it’s the equivalent of writers block.  I still find photographs and photography fascinating and one of the most inspiring things to look at each day but somehow my own photographic creativity packed up and went away. Thankfully my iPhone has been a way I could keep my hand in photographically and slowly but surely I’ve found my appetite again for making photographs with greater purpose and having fun with the camera again.

The fact there has been a plethora of bassets photographs recently is reflection of this renewed photographic energy.  But as much as I’m a loner and a home bird, I need to step out again and find some new photographic assignments that will capture my imagination and plan carefully for the opportunities of arising from the travel that is planned for later in the year.  This includes a trip to Queenstown which has some of the most beautiful scenery anywhere in New Zealand, a few days in San Francisco, a few weeks in England and finally a few days in Tokyo which will I am sure will be an amazing sensory experience.  I also want to push myself a bit harder with my photography closer to home – literally here at Domestic Executive HQ and also within the Wellington region making the most of the luxury of time I have when I’m not working.

But for now, here’s a selection of a little photo shoot with Mason.  He was of course completely oblivious to my camera but instead being a wicked basset stealing the toy from Fortnum and playing on his own.   I love the wild abandon a dog can have rolling around with their legs in the air like nothing else mattered in the world (which of course to them it doesn’t). No doubt Little Basset can be a charmer when he wants and for a few seconds was happy to lie perfectly for a basset portrait before he became much more interested in another toy he could steal and play with! 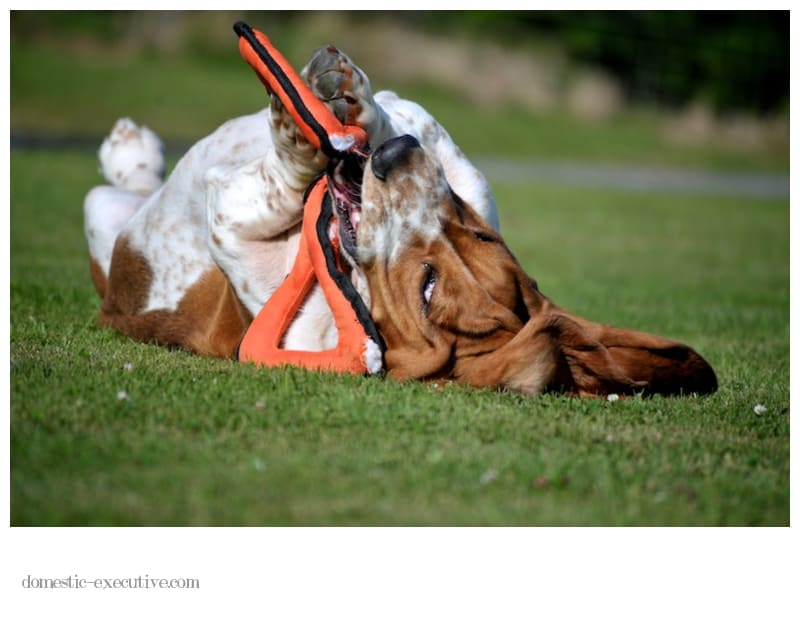