Like most siblings there is plenty of rivalry between our two hounds.  Probably more so between Fortnum and Mason since we’ve never really resolved the top dog role – the only leader in our house is me!

When it comes to running I think it’s fair to say what Fortnum has in terms of speed Mason has the edge on him in terms of agility.  Fortnum does not like at all and every time will try to beat Mason by every which way he can.

Yesterday when competition was up there was a fair amount of dirty tricks to win the race along the walkway.  I’ll let the pictures tell the story. 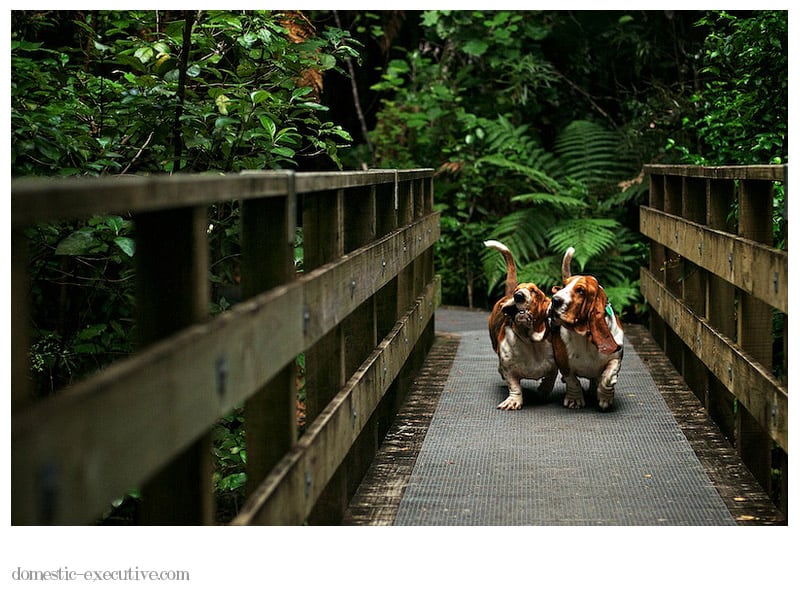 END_OF_DOCUMENT_TOKEN_TO_BE_REPLACED

Kia kaha is a maori phrase being banded around a lot right now. It’s a supportive affirmation offered to people under stress or difficulty meaning be strong (we’re with you/supporting you).   Watching the memorial service in Christchurch on TV it was clear to see how strong the people of Christchurch have had to be and will need to be looking into the future.

Looking at the coverage of the disaster that’s befallen the people of the north of Japan super human strength is also going to be required for them to recover from the earthquake, tsunami and possible radiation.  I’m not sure you’d be able to predict a more devastating scenario.

I can’t believe its only three and half weeks since the Christchurch and week since Japan’s own tragedy started unfolding.  It seems like a lot longer than that.  And as if natural disasters weren’t enough in the world there are plenty of man made conflicts that cause equal measures of death and destruction.

Through these troubled times Kia kaha seems like the a powerful affirmation to share with others even when you can’t do much more to help. 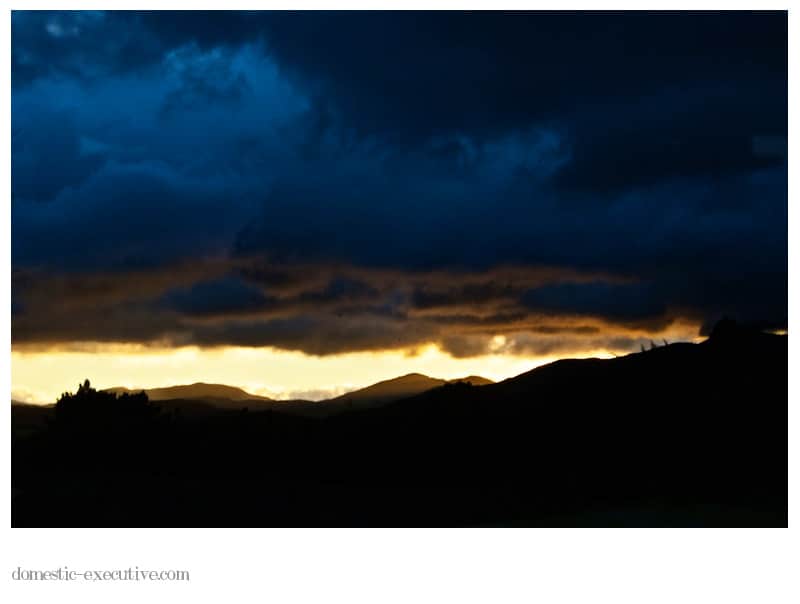 Sunrise over the Rimutakas – March 2011

For all the darkness, morning chills and mist on the hills there is still some things to admire in the garden.  The dews are getting heavier on the vegetables and they glisten in the morning sun.

It’s always a luxury to be able to walk the bassets during the week so it was especially special for us to venture out as a pack last Friday on the last day of our time off work.  I’m not sure at this stage they had yet forgiven me for leaving them even if they did have lots of fun whilst we were away.

Taking to the park on a Friday morning is a bit of a routine for us so having MT in tow caused quite a stir amongst the regular dog walking fraternity to have a stranger in their midst.  The hounds usual ability to wander sniff and cause general chaos was slightly curtailed with two people to keep them under control. 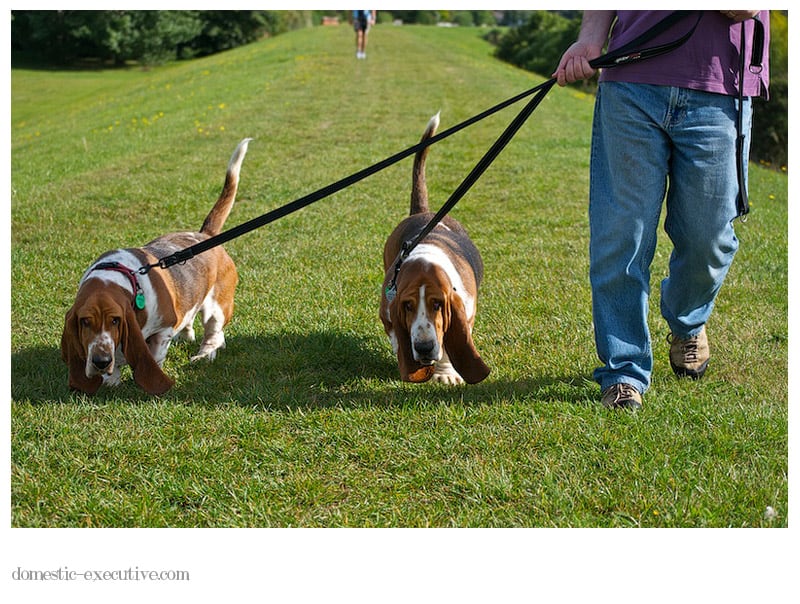 END_OF_DOCUMENT_TOKEN_TO_BE_REPLACED

Summer is still kicking out Autumn which is knocking determinedly at it’s door.  It’s been a pleasure to enjoy the garden that’s basking in sunshine.  As if to celebrate we’ve a new bloom in the kitchen garden – a globe artichoke.  I’ve grown these for the first time this year and looking forward to trying them out for size.  I didn’t realise at the time of planting that they are a perennial vegetable so they are going to have to produce some awesome globes for them to justify their place as a permanent fixture.  The signs are looking good though on the grounds of their rich colour and sheer architectural impact. 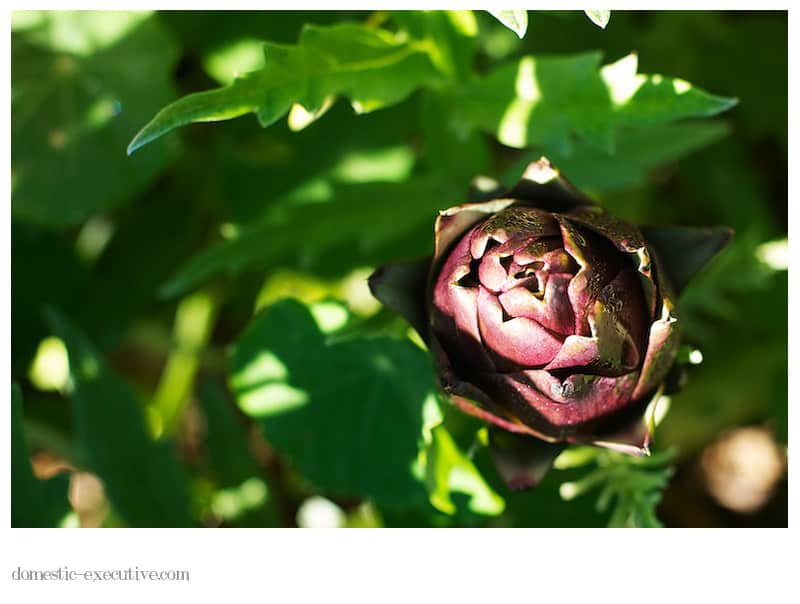 My heart was in my mouth watching the latest earthquake catastrophe unfolding on my TV on Friday evening (NZ Time).  Watching the tsunami rip through towns along Japan’s coast was another example of nature’s brutal force over all mankind.  I couldn’t help thinking, where will it all end?

Gone are the days when such disasters were being reported on – in the past tense.  Now information and communications technologies combined with our seemingly insatiable appetite for on the spot continuous news coverage brings us the tragic drama right to us almost simultaneously as it happens.  There is no doubt that in the middle of the Christchurch earthquake experience and it’s aftermath people outside of Christchurch knew much more than we did on the ground.

I have feelings of completely horror and helplessness all over again for the people of Japan’s north island.  Once again I’m reminded how fragile life is and how one ordinary day can turn into a living nightmare. As New Zealand was put in tsunami alert you can’t help but wonder what might be heading our way.  As it turned out it was a small swell which lapped our shores but nevertheless a gentle reminder that we are connected to the rest of the world and what is their disaster could be ours too and vice-versa.

When I trawled my photo stocks for something appropriate to accompany this post I was drawn to a few photographs I took at Birdling’s Flats on our return journey from Akaroa to Christchurch.  This is an isolated spot on the Kaitorete Spit and couldn’t have been more in contrast to the idyllic views of Akaroa Harbour.  Standing on the pebbly beach as the wind blew us almost off our feet this was raw coast at it’s finest. 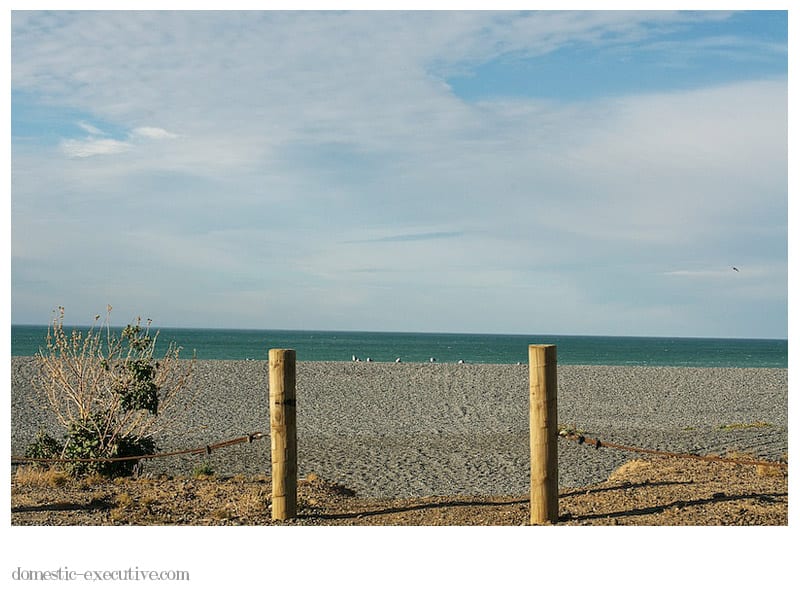 END_OF_DOCUMENT_TOKEN_TO_BE_REPLACED

It’s not hard to see the attraction of sailing – the feeling of wild abandonment and connecting with the rawest of earth’s elements.  Sitting back and enjoying the view is of course my sort of sailing, where you leave all the hard work to an experienced crew. With so much to look at on our Akaroa harbour excursion this was an exciting trip out and my camera was put into overdrive for a while to capture a glimpse of our marine adventure.

Before we set foot on the boat we were promised Hector Dolphins, Penguins, Seals and plenty of birds.  And boy did they deliver a show for us that afternoon. 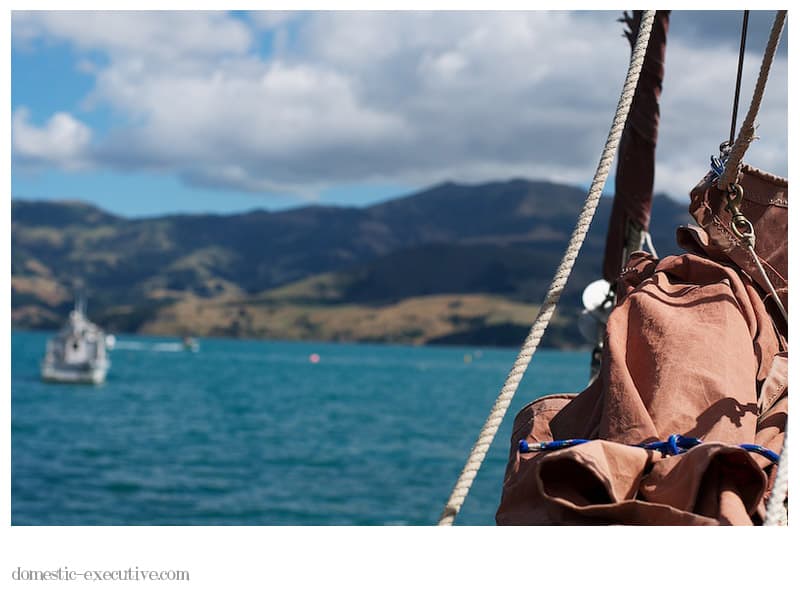 END_OF_DOCUMENT_TOKEN_TO_BE_REPLACED

Making the effort to reach isolated parts of New Zealand is almost always rewarded with a slice of kiwi paradise.  All around the Banks Peninusla are isolated bays providing sheltered beaches and stunning views.  We took a trip 20 minutes out of Akaroa to visit Le Bons Bay, it was simply stunning.

Although I was tempted to swim I didn’t have my togs.  Skinny dipping was an option but for the two men who cruised into the bay with their boat.  I’m shy like that. 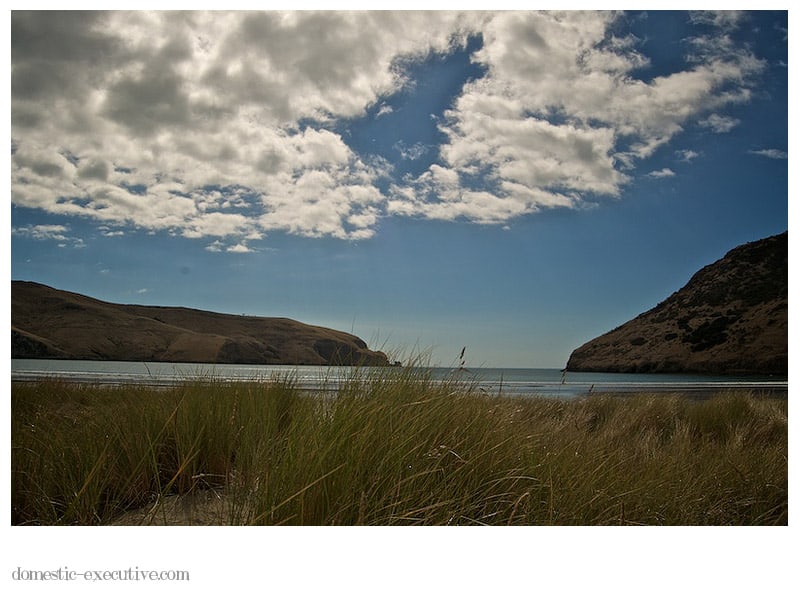 Behind the beach was a small settlement of houses and baches. If I were ever to want a place at the beach this would be the sort of place I’d like. A secret enclave with just a few people around to know that you’re not completely on your own. 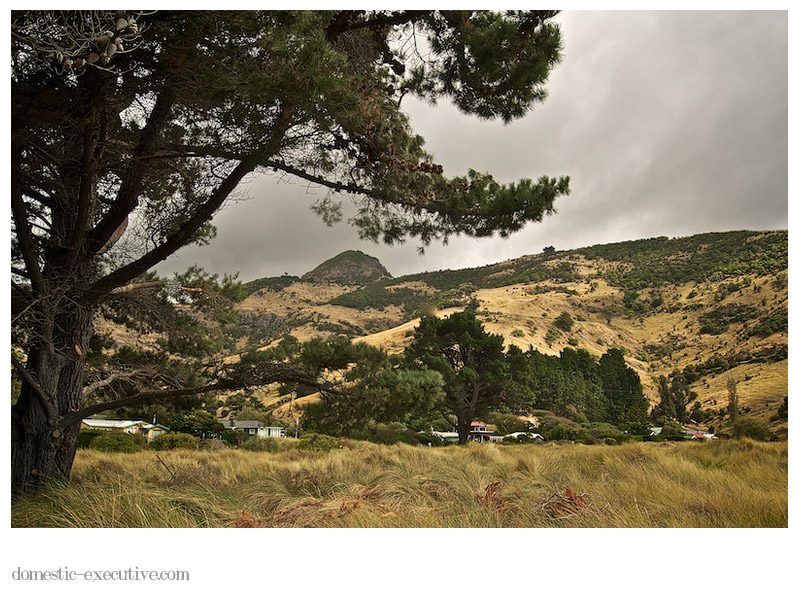 There is nothing like a stroll on the beach and looking out to sea. It’s places like this that you get perspective on New Zealand’s true isolation from the rest of the world.  Straight ahead several thousand miles away is South America.  Nothing in between. 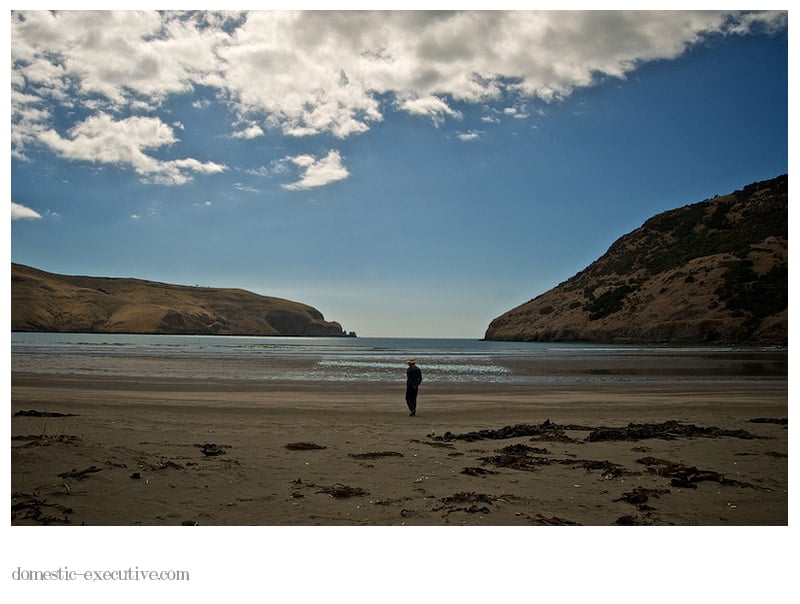 The morning clouds lingered in the sky as the sun was just peaked over the hills as we left Akaroa this morning. It looked like it was going to be another glorious day.  A cruise ship had sailed into the harbour and was offloading passengers for a day in the bays.  I was more than a tiny bit jealous since I hadn’t really had enough of this beguiling place.  I’ll be back I’m sure.  Perhaps when things are not quite so wobbly underfoot.

At least I have a few hundred photographs to remind me of the few glorious days we’ve spent down south. This time I’m really, not really I mean it, determined to get some prints for the walls of this rather special place. 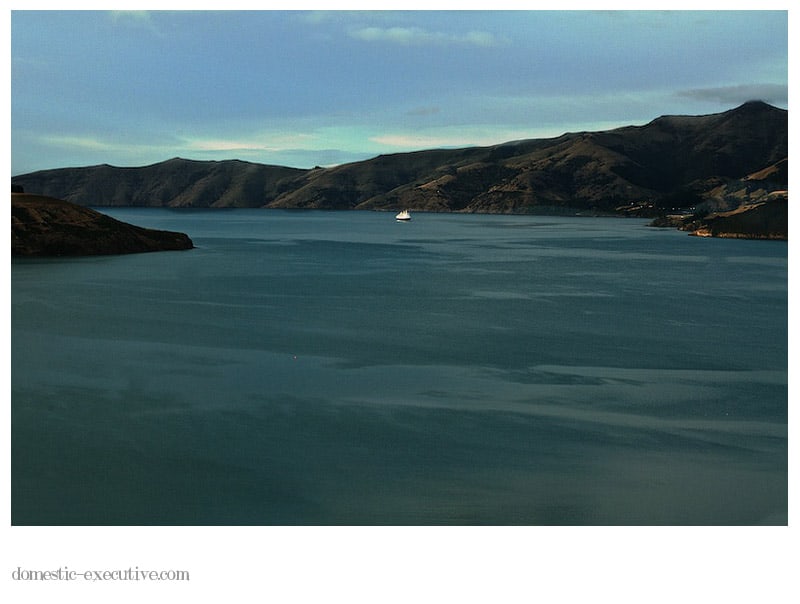 Try as I may to avoid the tourist traps, there is something irresistible about an excursion by boat.   Not being sailors ourselves there are few options than to join a tour boat if you want to explore from a new perspective.  Seems we not just picked the right boat but the right day and time.  Cruising along up front I was in pole position for all the wildlife marvels we saw – Hector Dolphins, Little Blue Penguins, New Zealand Seal, Cormorants and Albatrosses.  Can hardly believe our luck – seeing the big five of Akaroa on one trip.  Even the skipper was a little amazed.  My poor camera needs a rest. 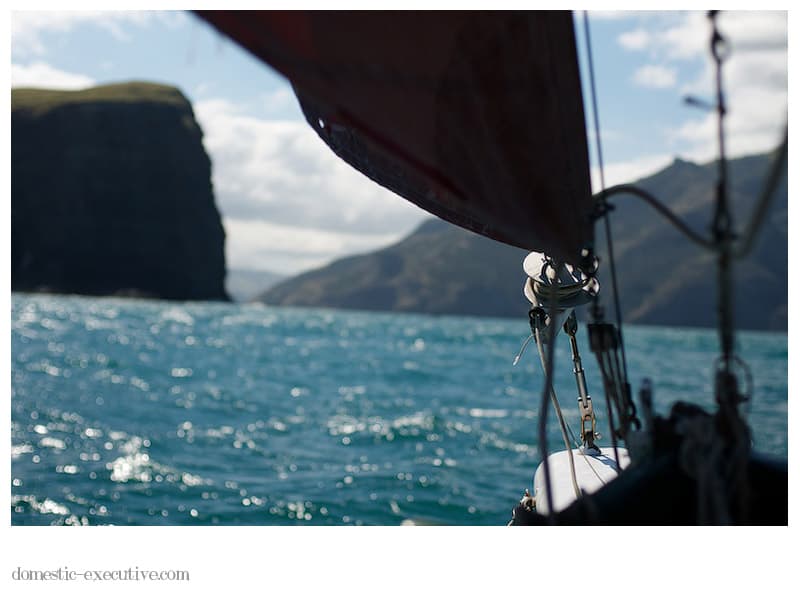